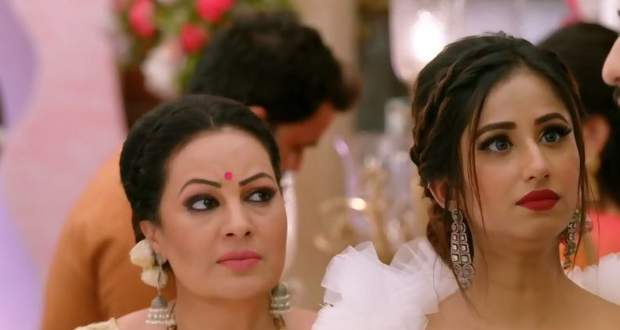 Today's Bhagya Lakshmi 24th May 2022 episode starts with Ayush reminding Shalu that no one wanted Lakshmi and Rishi to be together more than him.

Further, Ayush says that they were not meant to be together and goes to initiate the couple dance.

Rishi and Malishka are brought to the dance floor by Ayush.

While the couple of the moment dance romantically together, Lakshmi is also paired with another guy on the stage.

Malishka goes to her mother to fix some issues in her shoe.

At the same time, during the shuffling, Lakshmi and Rishi fall into each other's arms.

While Rishi and Lakshmi groove together to the music, Lakshmi asks Rishi aren't they performing their last dance together.

Further, Lakshmi questions Rishi why was he so nice to her if he eventually wanted to break her heart.

Meanwhile, Bobby, a waiter notices Rishi. He is no one other than Balwinder's friend who had informed Balwinder about Rishi being at Mahabaleshwar previously.

Bobby informs Balwinder that they failed to kill Rishi and he is getting engaged to Lakshmi at the Oberoi mansion.

To finally take his revenge, Balwinder decides to disguise himself as the waiter and kill Rishi.

On the other hand, Rishi drinks while talking to Rano.

Seeing this, Lakshmi takes the glass out of his hand and orders the waiters not to give drinks to Rishi.

After some time, Neelam announces the arrival of the priest for the engagement.

Before going, Malishka asks Lakshmi and her sisters to leave after having food and witnessing Rishi get engaged to the love of his life.

This time even Baani does not keep quiet and reminds Malishka that she must be getting late for her engagement.

Later, before starting the engagement ceremony, Rishi asks Malishka to be excited after seeing the ring.

Malishka perfectly does the overacting when Rishi shows the ring to her that was bought by her.

When Rishi takes the ring out of the box, it slips out of his hand and rolls over to Lakshmi's feet.

Lakshmi picks up the ring and walks to Rishi.

However, before returning it, Lakshmi asks Rishi why is he doing this to her.