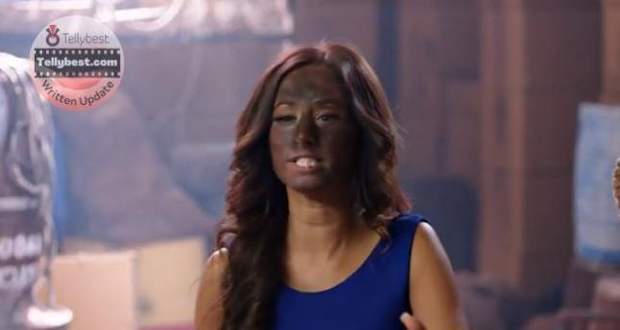 Today's Bhagya Lakshmi 24th November 2022 episode starts with Lakshmi telling Malishka that Rishi is not her love but a trophy for her.

Hearing this, putting the knife in Lakshmi’s throat, Malishka yells that if Lakshmi sees through her heart, she will see the love between her and Rishi.

Lakshmi then starts fighting with Malishka to snatch the knife away but Malishka stabs Lakshmi in her stomach.

On the one hand, the knife falls on the ground with blood dripping; on the other hand, Malishka and Lakshmi get unconscious.

Malishka however wakes up from her dream while screaming that she has killed Lakshmi but Balwinder mocks her by saying that she was daydreaming.

On the other hand, Ayush tells Shalu that his gut feeling is telling him that something is wrong with Lakshmi.

Ayush then notices a similar woman who looks like Lakshmi from behind and runs to talk to her.

When the woman turns, Ayush’s face falls and he murmurs a quick apology.

Afterward, Shalu calms worried Ayush down by reminding him that Lakshmi will be alright very soon.

Elsewhere, Rishi storms into the doctor’s chamber with Lakshmi in his arms and orders the doctor to check her.

Meanwhile, Ayush tells Shalu that they will find Lakshmi very soon to which Shalu questions him if Lakshmi’s missing is related to Malishka’s kidnapping.

Announcing that this can be true, Ayush lovingly orders Shalu to go home without worry.

Shalu stands there still even when Ayush gets into the car so Ayush again comes out of his car and urges Shalu to go home.

With a soft smile, Shalu turns away to leave while Ayush just watches her with dreamy eyes.

Later, Harleen gets stunned to see Rishi arriving at the home with Lakshmi in his arms and she calls his name.

Afterward, Lakshmi is lying unconsciously in the bed while Harleen thinks she will tell about Malishka's kidnapping once he is emotionally stable.

Virendra and Neelam also enter the room just then and Virendra and Harleen console Rishi by saying that Lakshmi will be okay soon.

In contrast, Neelam remarks that sometimes people need to bear the bad luck of someone else’s bad luck.

Entering the room just then, Ayush announces that he was searching for Lakshmi everywhere and runs out of the room.

On the other hand, in Malishka’s home, Kiran hopes that Rishi soon accepts Malishka as his wife so Malishka stops her madness.

Meanwhile, Shalu informs Rano that Lakshmi is also missing and Rano even offers to go to the Oberoi mansion to check.

Shalu then gets a call from Ayush who informs her that Lakshmi is fine and Shalu cuts the call.

Later, Rishi questions everyone if something has happened during his absence but no one replies.

Rishi then meets Ayush outside the room who reveals the last night's event and how Kiran blamed Lakshmi for Malishka’s kidnapping.

On one hand, Ayush tells everyone about how he found Lakshmi's car thrashed in the road; on the other hand, Rishi goes to Kiran and scolds her for thinking Lakshmi can do any such thing.

© Copyright tellybest.com, 2022, 2023. All Rights Reserved. Unauthorized use and/or duplication of any material from tellybest.com without written permission is strictly prohibited.
Cached Saved on: Wednesday 23rd of November 2022 11:18:47 PMCached Disp on: Thursday 1st of December 2022 03:18:54 AM