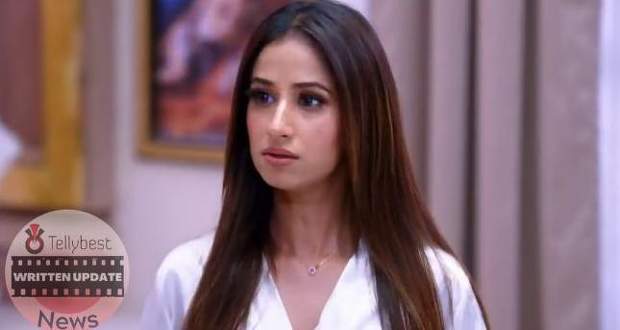 Today's Bhagya Lakshmi 24th October 2022 episode starts with Malishka scolding Lakshmi for going out with Rishi without caring about his safety.

Lakshmi however reminds Malishka that she is here which means she wants to know about the murderer and Malishka gulps.

Rishi also slides with Lakshmi and repeats the same question while Malishka tells herself mentally that she cannot ask Rishi further questions as it will draw attention to her.

Later, Malishka enters her room and Balwinder grabs her from behind and puts his hands on her mouth.

Hearing Balwinder’s voice, Malishka furiously turns around and starts shouting at him for trying to take her boyfriend’s life but Balwinder reminds her that she wanted to kill him so it is fair.

He and Malishka get into an argument about it and Balwinder orders her to shelter him.

Malishka refuses to help him and orders him to leave.

Balwinder tells Malishka that if he goes to jail he will take Malishka with him so Malishka should pack her bags.

Malishka calms down hearing this and orders Balwinder to give her the pen drive if he wants to stay here.

Balwinder starts searching his pockets for it but fails to find it and looks at Malishka sheepishly.

Malishka yells in frustration that if Rishi finds it then they are going to jail and Balwinder sits on the bed with a sour expression.

Meanwhile, Lakshmi finds the pen drive in the drawer and asks Rishi if it belongs to him but Rishi denies it.

Rishi even adds that their hotel staff uses this kind of pen drive, Lakshmi urges him to bring the laptop to watch it, and Rishi says that maybe it has fallen from Balwinder’s pocket.

After watching the video, Lakshmi exclaims that this can prove their innocence.

Rishi announces that now they know who is the culprit.

On the other hand, Balwinder gets stunned after seeing the interior design of the room and tells Malishka that he will do twelve murders for her each year if she lets him stay in the mansion.

Malishka orders him to stay hidden here for a few days until things are sorted out.

Before Malishka can leave, Balwinder tells her that he cannot sleep alone and Malishka slaps him hard.

Putting a hand on his face, Balwinder urges her to give him some alcohol, and furious Malishka points towards the cabinet.

After Malishka walks away, Balwinder brings the alcohol and starts drinking it while thinking about his Lakshmi.

On one hand, Rishi informs Lakshmi that he will punish the culprit himself; on the other hand, Malishka wishes for no one to see the pen drive.

The next morning, Harleen happily informs Virendra and Neelam about Rishi finding proof of his innocence.