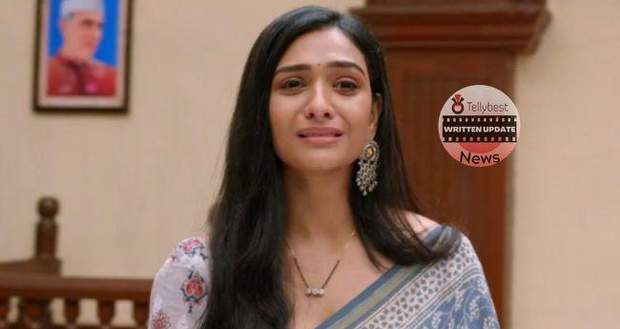 He waits for Lakshmi while she asks Ayush to take her to Rishi as he might feel lonely there.

Meanwhile, Shalu asks to take her too but Sonia arrives and humiliates her by calling her a ‘village cow’ and to not come to her house frequently.

At the same time, Virendar scolds Sonia for insulting Shalu as she is Lakshmi's sister and she has the right to come.

Lakshmi and Virendar have a discussion about current circumstances and Neelam being angry with Rishi.

Lakshmi denies Virendra visiting Rishi as he might get more tense seeing him there.

Virendra appreciates Lakshmi and hopes that Neelam too understands her soon.

Moreover, in the kitchen, Sonia again tries to insult Shalu who came there to drink water snatching a glass from her and accusing her of being a gold digger.

Karishma arrives and speaks in favor of Sonia asking Shalu to shut her up and talk respectfully with them.

After a while, Ayush tries to calm an angry Shalu who is disappointed by Karishma's words, and suggests she be quiet in front of them.

Meanwhile, Balwinder boils in anger and says that Abhay was right he is a dog as he can't get Lakshmi through anyway.

Guddu tries to calm him down while Balwinder blabbers on getting Lakshmi at any cost either by killing Rishi.

At the same time, Ayush and Shalu have sweet bitter fights while Lakshmi asks them to be quiet as she wants to go to meet Rishi.

Meanwhile, Balwinder compares his love for Lakshmi with eternal lovers like Rangha, Heer, etc, and asks Guddu to see love flowing through his eyes.

He even says that he will do everything even will cut his hair to achieve Lakshmi at any cost.

Meanwhile, Lakshmi with Ayush and Shalu arrives at the Police station but the Inspector informs them that they don’t allow many visitors in one day.

Lakshmi gets confused and gets to know about Malishka's visit.

They convince Inspector and he allows Lakshmi to meet Rishi for 10 mins.

Moreover, Ayush plans to surprise Rishi by teasing him that Lakshmi is busy so she didn't come to meet him.

Rishi gets angry knowing this and wonders what is more important than him for Lakshmi.

Lakshmi surprises him by blindfolding his eyes but he also tries to tease her back by recognizing her as Malishka.

Lakshmi feels bad and says she will send Malishka as he is missing her more.

Meanwhile, Rishi grabs her closer and they both look and share a romantic eye lock.

© Copyright tellybest.com, 2020, 2021. All Rights Reserved. Unauthorized use and/or duplication of any material from tellybest.com without written permission is strictly prohibited.
Cached Saved on: Saturday 1st of October 2022 10:08:01 PMCached Disp on: Sunday 2nd of October 2022 12:42:15 PM