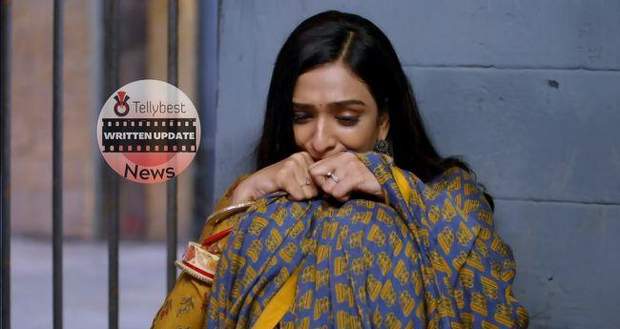 Today's Bhagya Lakshmi 25th August 2022 episode starts with the manager messaging Aayush about Rishi being in the hospital while the doctor comes out and tells the manager that Rishi is out of danger and in a stable condition now.

Meanwhile, at the police station, the male police officer's duty ends and he leaves while Inspector Manya comes for her shift.

Shalu requests and begs the Inspector to let her talk to Lakshmi and give her some encouragement.

However, Inspector Manya tells Shalu that it is against the rules and tells her to leave.

At the Oberoi mansion, Malishka sits in the room and smiles happily recalling how Lakshmi got arrested and taken away by the police.

Just as Malishka talks about celebrating her victory, Kiran comes there with a wine bottle and closes the door as they celebrate.

Kiran tells her that she is worried Rishi will come back and save Lakshmi once again.

Malishka confidently states that Neelam won't let Lakshmi do anything and sips her wine.

Inspector Manya pities her and lets her meet Lakshmi.

Meanwhile, Shalu meets Lakshmi who stands up in a hurry and begs her to find out and tell her if Rishi is alright or not.

Shalu recalls trying to call Rishi and him not picking up the call.

Back into the present, Shalu tells Lakshmi that Rishi is alright after which she begs Lakshmi to not take the blame on herself and fight for herself.

Lakshmi says that Rishi will help her but Shalu firmly tells her to not trust Rishi which shocks Lakshmi.

At the same time, Rishi regains consciousness and takes Lakshmi's name while the nurse tells him to sit back he has to be kept there for observation.

Shalu thinks that Rishi will not go against Neelam but lies to Lakshmi that she said that in frustration and that she believes Rishi will come to help her.

Just then, the constable comes there and takes Shalu away as Lakshmi assures her that Rishi will come and save her.

Rishi regains consciousness and rushes out of the hospital saying that Lakshmi needs him.

Meanwhile, Neelam is talking to a lawyer and is talking about filing a case against Lakshmi for putting the guests of her hotel in danger when Virendra takes the phone and disconnects it.

He asks her if she really hates Lakshmi that much and Neelam venomously says that Lakshmi deserves all the hate she is getting.

© Copyright tellybest.com, 2020, 2021. All Rights Reserved. Unauthorized use and/or duplication of any material from tellybest.com without written permission is strictly prohibited.
Cached Saved on: Friday 30th of September 2022 08:27:13 PMCached Disp on: Saturday 1st of October 2022 04:44:15 PM