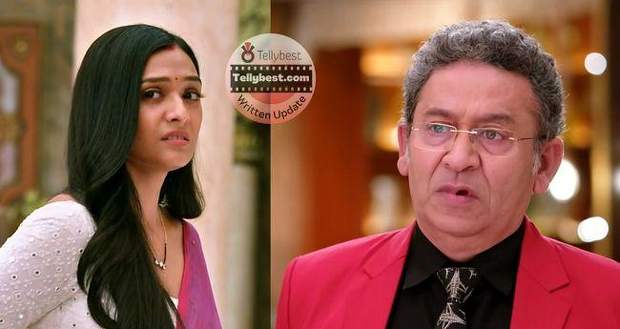 Ayush further yells at Rishi for not coming into the hall on time and Rishi murmurs that he missed the chance to see Lakshmi leave.

This irritates Ayush and he emotionally tells Rishi that Lakshmi turned around one last time before leaving.

On the other hand, in a cafe, Malishka tells Sonal that finally, her dream is coming true because of Sonal only.

Meanwhile, in Oberoi's mansion, Rishi informs Ayush that Lakshmi was so angry with him that she locked the door behind herself.

This shocks Ayush and he announces that Lakshmi, his sister-in-law is like someone who opens the door for people not close it.

When Rishi mentions that he tried to stop Lakshmi but Lakshmi was very angry, Ayush accuses him of breaking his heart.

Rishi then embraces Ayush in a tight hug while Ayush keeps blaming Rishi for breaking his and Harleen’s heart.

On the other hand, Lakshmi is crying in her home thinking about Rishi’s promises, and questions herself if Rishi’s promises were true or that Rishi whom she found in Malishka’s bed.

Shalu enters the room just then and urges Lakshmi to eat the food while Lakshmi denies eating.

Shalu orders Lakshmi to either eat the food or go back to Rishi.

When Lakshmi looks at Shalu with wide eyes, Shalu informs Lakshmi that she cannot just sit and cry like this.

Meanwhile, in Oberoi's mansion, Neelam happily tells Karishma that Malishka is the only ideal match for Rishi, and Karishma jumps in excitement.

Soniya and Devika enter the room just then and Karishma joyfully informs Soniya about Rishi and Lakshmi’s divorce.

Soniya announces that they need to celebrate this whereas Devika exclaims that this is bad news.

Looking at Devika, Soniya tells her that Rishi has gotten free from middle-class Lakshmi’s grip but Devika announces that Lakshmi has done everything in her power to protect the Oberoi family.

When Soniya screams at Devika for taking Lakshmi’s side, Harleen enters the room to urge Neelam to think about Rishi’s happiness.

In reply, Neelam tells Harleen that Rishi will soon forget about Lakshmi since there was no love between them but Harleen announces that Rishi has not stopped Lakshmi because of his promise to Neelam.

Harleen even informs Neelam that if she starts counting Lakshmi’s good characteristics it will take a long time and walks away.

Afterward, Neelam tells Karishma that they need to do something for Rishi’s happiness very soon.

On the other hand, Rishi is imagining Lakshmi everywhere in the room and mutters to himself that Lakshmi will never come back now.

Lakshmi arrives at the door just then and Rishi embraces her in a tight hug.

He then begs Lakshmi to stay here as he cannot live without her while Lakshmi looks at him with tears.

Lakshmi, however, questions Rishi that if he knew he cannot live without her then why did he do this to her?

Taking Lakshmi's hand in his, Rishi begs her to give him a chance to make everything right but Lakshmi does not believe him.

© Copyright tellybest.com, 2022, 2023. All Rights Reserved. Unauthorized use and/or duplication of any material from tellybest.com without written permission is strictly prohibited.
Cached Saved on: Wednesday 25th of January 2023 11:20:29 AMCached Disp on: Tuesday 31st of January 2023 07:49:43 PM