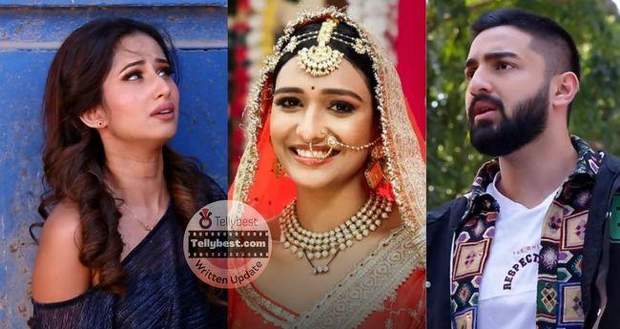 Today's Bhagya Lakshmi 25th January 2023 episode starts with Rishi walking on the streets when one of the goons attacks him.

Malishka chides at the other goon by saying that they are not good goons as they cannot even fight one alone man and orders the other one to help the goon.

However, during the fight, Malishka intentionally sends the stick so the goon can grab it not Rishi.

While Rishi looks confused, the goon hits Rishi’s head with the stick causing him to fall unconscious and Malishka announces that she does not want Rishi to attend Lakshmi’s wedding.

Meanwhile, a lady finds Kamli lying on the floor unconscious and once the lady gives Kamli medicine, Kamli mumbles that she cannot rest as she needs to arrive at the wedding early.

On the other hand, Balwinder gets irritated as the pandit utters the mantras in Sanskrit and he is not able to understand them.

After putting the holy powder on fire, Balwinder reminds the pandit that he is here marrying one couple only so he should call them husband and wife soon.

The pandit stands up and refuses to continue the rituals but Rano calms down the pandit by announcing that Balwinder is very excited.

The pandit walks away after advising Balwinder to do court marriage if he is too excited whereas Harleen feels relaxed as now the pandit will run away and the wedding will be canceled.

Hearing Harleen’s wish, Neelam announces that they will call another pandit but the marriage will happen today only, and meanwhile, Balwinder calls the pandit egoistic.

In the meantime, Balwinder’s friends don’t let the pandit walk away as they are standing on the track with their hands tied and Rano pleads with the pandit to "listren" (listen) to her only.

She even tells the pandit that she is doing hand plastering (joining hands) and she is about to mention that it is about a ton of money but corrects by mentioning that it is her daughter’s marriage.

Once the pandit agrees to continue the rituals, Balwinder happily tells him that the pandit can even utter birthday, and death mantras, and he will not object.

Lakshmi runs to the wedding venue

Meanwhile, after coming back to consciousness, Lakshmi recalls Ayush’s words and announces that she needs to go back to the wedding venue.

When Ahana urges Lakshmi to not care about the marriage as Balwinder’s marriage is happening with someone else, Lakshmi gets nervous as she is sure Kamli is not smart enough to sit in the marriage by herself then Bani is the one doing the marriage rituals.

Ahana tries to stop Lakshmi but Lakshmi gets into the car and starts driving it.

In the meantime, Ayush expresses to Bani that he cannot see Lakshmi ruining her life and he is feeling immense pain.

In reply, Bani accuses God of writing this tragedy in Lakshmi’s fate but they need to attend the wedding as Shalu is all alone inside.

Elsewhere, in Malishka’s home, Kiran orders Sonal to spill the truth about Malishka not being in the house as she is worried Malishka will ruin her chance of marrying Rishi.

However, Sonal announces that she knows Malishka will not do something stupid to jeopardize her chance.

Back in the wedding venue, Shalu starts running when the pandit urges her and Balwinder to get up for the gatbandhan ritual.

Harleen advises Shalu to run so fast that no one can stop her and even Virendra announces that he is the first father who is happy to see his daughter running away from the marriage.

During the chase, Balwinder stops to pick up his alcohol bottle and Shalu is running around the hall while Neelam and Rano stare at her in shock.

Back to Rishi, the goons tie Malishka and Rishi’s hands and feet and walk away.

Malishka then explains that it was her plan to make Rishi fall unconscious.

On the other hand, Rano and Balwinder are busy arguing about Lakshmi’s sudden mood swing while Balwinder’s aunt mentions that if she was young she would have grabbed Lakshmi.

On one hand, Shalu continues her run; on the other hand, Kamli arrives at the wedding venue.

Later, Lakshmi arrives at the wedding venue and orders Kamli to wait for her.

Meanwhile, Virendra and Harleen plan to help Shalu run and Ayush arrives there to announce he will help her to escape.

When Ayush stands beside Shalu, Shalu calls him stupid which makes him confused as Lakshmi is sounding like Shalu.

Just then, Balwinder pushes Ayush and Virendra informs Harleen that he knows Ayush will get beaten up but he will surely rescue Lakshmi.

While Balwinder yells at Lakshmi for making their marriage a zoo, the door opens and Lakshmi enters suddenly.

© Copyright tellybest.com, 2022, 2023. All Rights Reserved. Unauthorized use and/or duplication of any material from tellybest.com without written permission is strictly prohibited.
Cached Saved on: Wednesday 25th of January 2023 11:56:49 PMCached Disp on: Monday 6th of February 2023 05:27:28 AM