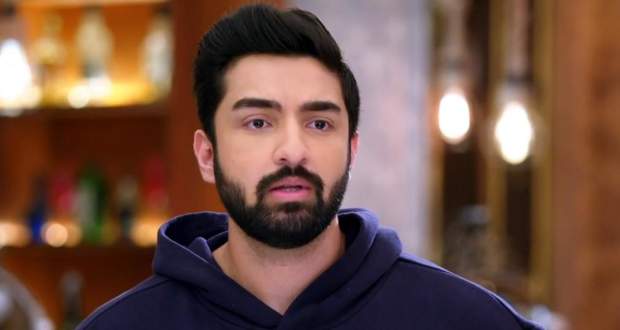 This makes Lakshmi angry and she announces that she will not talk to Rishi now.

Instead of getting angry, Rishi once again lovingly teases Lakshmi that mute Lakshmi is better for his peace.

After some time, unable to bear the silence anymore, he softly tells Lakshmi that he loves her voice.

On the other hand, Balwinder breathes a sigh of relief as Ayush is injured now.

However, his peace is short-lived as Ayush starts following him while limping.

Meanwhile, in the Oberoi mansion, Rishi informs Lakshmi that he will not let anyone defame her.

Before Lakshmi can reply, they hear a bell sound and run towards it thinking it must be Ayush.

On the road, during the fight, Balwinder accidentally knocks Ayush out.

Thinking Ayush is dead, scared Balwinder runs away from there.

At the same time, seeing police in the mansion, Dadi collapses on the sofa as she thinks something terrible has happened to Ayush.

While others are calming Dadi down, Malishka worries as she thinks Balwinder has killed Ayush.

She is sure that if something happens with Ayush, Soniya will spill her secret to Neelam.

Much to Malishka’s relief, Lakshmi reveals how Virendra has told them about a new brave officer who will solve the case quickly.

However, Dadi is still not convinced and she inquires these constables if Lakshmi is telling the truth or not.

When they tell Dadi that Lakshmi is telling the truth, their sir madam, Durga Prasad Singh arrives at the mansion.

She then informs everyone that they have committed a crime by holding Balwinder hostage.

After warning them, she looks at Malishka strangely.

She even scolds Rishi for taking law into his own hands.

On the other hand, Malishka is now scared as thinks this lady Singham is a threat to her.

After ordering everyone not to take any action, she asks Malishka about her identity.

While Durga leaves with her two constables, Dadi exclaims that Durga is like a goddess kali for criminals.

She brings Ayush's senses back and orders him to stay with him at her home.

However, to look like a strong man, Ayush initially denies her help, but when Shalu orders him to walk on his own, he takes her help.

Seeing Shalu so worried for him, Ayush smiles to himself.

© Copyright tellybest.com, 2022, 2023. All Rights Reserved. Unauthorized use and/or duplication of any material from tellybest.com without written permission is strictly prohibited.
Cached Saved on: Wednesday 25th of January 2023 10:30:05 AMCached Disp on: Thursday 9th of February 2023 08:57:55 AM