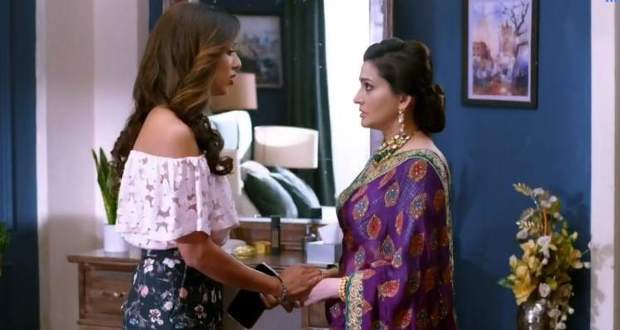 Today's Bhagya Lakshmi 25th June 2022 episode starts with Lakshmi telling Neelam that the truth will come out at any cost.

Hearing this, Neelam asks Lakshmi if she wants money then she should have just asked for a big number of alumni instead of faking her pregnancy.

However, Rishi tries to calm Neelam down but Neelam shrugs her shoulder and announces that she will be happy once Rishi comes home without Lakshmi.

Later in the living room, while everyone is scolding Harleen for excessive sugar intake, Lakshmi approaches her with fruit cream.

Harleen then tells everyone that she is eating the sugar to reduce her sorrow for not having Rishi and Lakshmi’s baby much to everyone’s shock.

She even asks Lakshmi to give the recipe to Mukesh before she leaves.

Hearing this, while Malishka is informing Harleen that she will make all sorts of diet food for her, Rishi notices Lakshmi’s uneasiness.

As excepted, Rishi asks Lakshmi if she is ok or not, and seeing Rishi’s concern for Lakshmi, Malishka burns with jealousy.

Even Neelam comments that because Lakshmi has an impure mind, her body is also suffering.

However, Rishi ignores Neelam’s sarcasm and informs Lakshmi that they will go to the doctor first much to Malishka and Neelam’s dismay.

Later during driving, Rishi plays a podcast while Lakshmi stares at Rishi longingly.

Out of nowhere, Rishi suddenly asks Lakshmi to come out and enjoy the rain with him.

While a romantic song is playing in the background, Rishi and Lakshmi dance with each other.

Rishi even gifts Lakshmi a dozen balloons which brings a big smile to Lakshmi’s face.

However, when Rishi stops the car in front of the court, Lakshmi realizes that it was all her imagination.

Elsewhere, while Rano scolds Neha for using a face pack, irritated Neha informs her that she is taking preparation so she can also get a handsome rich boyfriend in the Oberoi mansion like Lakshmi.

Hearing this, Rano advises her to focus on her manners, not on beauty.

Later in the Oberoi mansion, while Ahana is asking Gautam if he has mentioned anything to his parents, Sonia interrupts them with nimbu pani.

Instead of getting happy, Ahana scolds her for interrupting.

When Sonia returns to the living room, she informs everyone that Ahana looks stressed.

Hearing this, Neelam decides to check up on them.

© Copyright tellybest.com, 2022, 2023. All Rights Reserved. Unauthorized use and/or duplication of any material from tellybest.com without written permission is strictly prohibited.
Cached Saved on: Monday 21st of November 2022 08:02:42 AMCached Disp on: Friday 9th of December 2022 06:51:42 PM