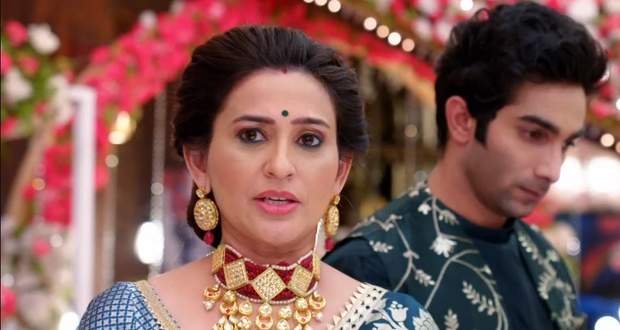 Today's Bhagya Lakshmi 25th May 2022 episode starts with Lakshmi asking Rishi whether he ever felt anything for her.

Lakshmi exclaims that according to Rishi though Lakshmi saved his life several times, he does not love her.

Kiran, Karishma, and Sonia remind Lakshmi that she had signed the divorce papers because she wants money.

However, Rishi stops everyone and walks up to Lakshmi.

After stating many things, Rishi tells Lakshmi that she has gone crazy and offers to lend money for her mental treatment.

Showing off his attitude, Rishi says that he can never love Lakshmi and addresses her as Lakshmi Bajwa again.

Shamelessly, Malishka starts laughing and everyone joins her.

The voice of everyone's laughter overpowers the sound of Lakshmi's heart breaking because of the humiliation caused by Rishi.

Suddenly, Lakshmi's illusion breaks and she realizes that she hasn't walked up to Rishi yet.

As Malishka demands to clean her ring as it had fallen down, the engagement gets delayed.

In the meantime, Shalu and Baani get into an argument with Sonia.

When Sonia complains about it to Ayush, he drags Shalu to a corner to chide her.

Further, without fearing Ayush, Shalu tells him that Rishi is married to Lakshmi and this engagement is valueless.

On the other hand, Malishka does not leave any moment to taunt Lakshmi and brag about her engagement.

When Malishka challenges Lakshmi to stop her engagement, Lakshmi reminds her that she can stop anything she wants.

Meanwhile, Balwinder reaches the Oberoi mansion disguised as a waiter and meets his friend Bobby with whom he has planned to kill Rishi.

At the function, Malishka starts whining about Lakshmi's words to Rishi.

However, Rishi tells Lakshmi why is she reacting oddly though she is well-versed by the fact that he only loves Malishka.

Further, Lakshmi clears her words that Malishka is no one for her but Rishi is still related to her in some way.

© Copyright tellybest.com, 2022, 2023. All Rights Reserved. Unauthorized use and/or duplication of any material from tellybest.com without written permission is strictly prohibited.
Cached Saved on: Wednesday 25th of January 2023 06:07:12 PMCached Disp on: Sunday 5th of February 2023 12:14:52 PM