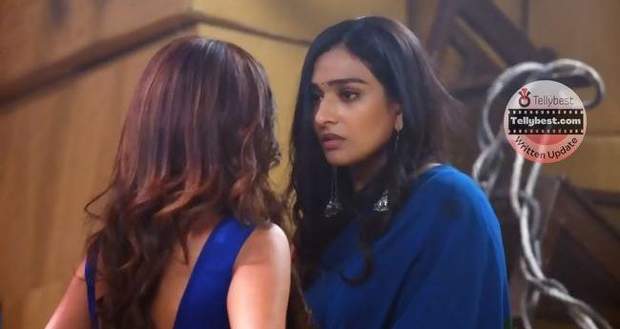 Looking at Lakshmi, Rishi asks her why she was running on the road to which Lakshmi explains how she escaped some goons when they were busy fixing their car.

She further adds that while running, she fall and hit her head on a rock due to which she fell unconscious.

Rishi then questions Lakshmi if she remembers the face of the goons to which Lakshmi replies that the goons were wearing masks.

She also mentions that the goons were not talking as if they feared her recognizing them.

Virendra however scolds Lakshmi like a fatherly figure for going to a dangerous place alone while Lakshmi nods.

After everyone walks away, Lakshmi thanks Rishi for saving her but Rishi announces that he is yet to prove her innocence.

Lakshmi then tells Rishi with a grin that it is his duty to save her always since he is her soulmate and Rishi embraces Lakshmi in a tight hug.

On the other hand, looking at Malishka’s face Balwinder thinks she must be planning something inside her head.

He even panicking urges Malishka to scold him when she stands up with the knife.

Meanwhile, Rishi goes to the police station to complain about Malishka’s kidnapping.

He then urges the police not to consider Lakshmi a suspect and requests the officer to find Malishka soon.

After Rishi walks away, the police officer tells his co-worker that this matter is twisted.

On the other hand, Balwinder murmurs that he failed his mission due to Rishi while Malishka attacks him with a knife.

Malishka then frustratingly yells that Rishi always comes to save Lakshmi and Balwinder advises her to forget about it.

When Malishka announces her deal is still the same, Balwinder informs her that now Rishi and the police both are involved in the matter so it is hard for him to kidnap Lakshmi.

Hearing this, Malishka calls Balwinder not masculine but Balwinder announces that his life is more important to him.

After Balwinder walks away, angry Malishka yells that she will kill Lakshmi today at any cost.

Later, Balwinder returns with food for Malishka who curses Lakshmi since she does not eat low-class food.

Meanwhile, in Oberoi's mansion, Rishi gives Ayush a gift while muttering that he is sure that Balwinder is behind this.

He further adds that Balwinder kidnapped Malishka to blame Lakshmi but Ayush announces he thinks Malishka is framing Lakshmi.

In the meantime, Kiran calls Malishka to tell her that she has lost Rishi forever which shakes her.

© Copyright tellybest.com, 2022, 2023. All Rights Reserved. Unauthorized use and/or duplication of any material from tellybest.com without written permission is strictly prohibited.
Cached Saved on: Thursday 24th of November 2022 11:36:41 PMCached Disp on: Wednesday 7th of December 2022 12:17:54 PM