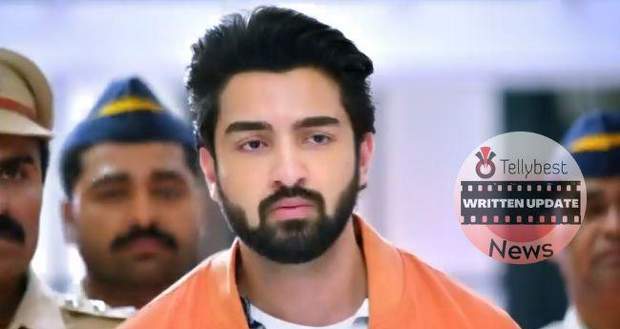 Today's Bhagya Lakshmi 25th October 2022 episode starts with Aahana happily telling everyone about how Lakshmi found the pen drive and gave it to Rishi.

Neelam then questions Harleen about how they found the news early than she and Virendra.

Aahana states that she overheard Rishi telling the news to Ayush and Harleen tells them that Lakshmi told them about it.

Harleen also urges Virendra to give her a gift and Virendra announces he will give her whatever she wants.

Neelam announces that she wants the culprit to get hanged.

On the other hand, Balwinder falls from his bed after hearing the doorbell and thinks Surpenakha (Malishka) is knocking on his door.

He also thinks that maybe Malishka has called the police and mutters that he will take revenge.

Meanwhile, Kiran gets shocked to see Rishi with the police at the entrance.

Malishka who was walking toward the hall stopped on her track startled.

Looking at Malishka dead in her eyes, Rishi yells that he has seen the footage and knows about the culprit.

A flashback shows Lakshmi, Rishi, and Ayush showing the footage to the police officer.

The police officer informs Rishi that he is now free of the charges and questions Rishi about how they never thought about using the footage.

Rishi goes with the police to search for Balwinder while Lakshmi and Ayush stay in the police station to fill out formalities.

Meanwhile, Rishi tells Malishka that he is very disappointed in her while Kiran repeatedly says Malishka is innocent.

Malishka however grabs Rishi’s hand and starts telling him how much she loves him and she has become desperate to marry him.

She further adds while sobbing that she cannot tolerate Lakshmi with him so she made a mistake.

On the other hand, Lakshmi informs Ayush that she doubts Malishka and Balwinder are both involved in the hotel incident.

Lakshmi further tells Ayush that Malishka is not pro-criminal so she will accept her mistake sooner or later.

Later, Rishi questions Malishka to reveal her mistake and Balwinder is watching them from a distance.

Before Malishka can say anything, she realizes Rishi does not know anything about her part.

She quickly tells Rishi that she is guilty of not seeing Balwinder and Rishi believes him.

Rishi then announces that the police think Balwinder is hiding there so they want to search her house.

The police add that it may possible that Balwinder wants to harm Malishka but Malishka denies it.

The police then also accuse Malishka of being Balwinder’s right hand so they need to search the house.

Unable to see any other path, Malishka starts guilt-tripping Rishi and announces how he can doubt her when he knows very well that she can give her life for him.

This works as Rishi orders the police to go away.

© Copyright tellybest.com, 2022, 2023. All Rights Reserved. Unauthorized use and/or duplication of any material from tellybest.com without written permission is strictly prohibited.
Cached Saved on: Monday 21st of November 2022 01:55:26 AMCached Disp on: Tuesday 29th of November 2022 12:22:58 AM