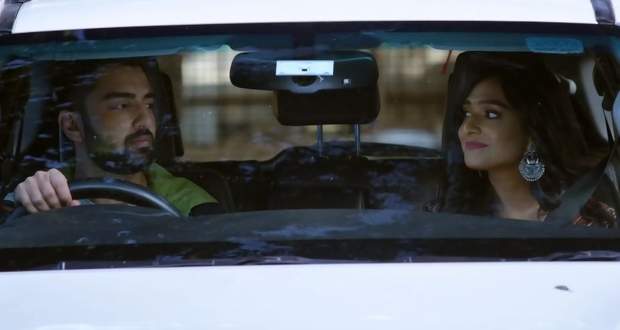 While on the road, Laxmi playful teases Rishi for being quiet as a rock to which Rishi responds that he isn't sitting comfortably but has to drive with a childlike resentment on his face.

Still carrying the resentment in his heart Rishi finds it hard to leave the topic of how Laxmi wanted to give him a divorce.

Rishi tells Laxmi to keep quiet for the rest of the trip.

Bored, Laxmi starts the radio which plays sensual songs that transport back to the steamy night where the distance between them was less than a hair.

Laxmi changes the song right away.

Here, Malishka follows Lakshmi and Rishi, building hatred and resentment in her heart.

Rishi's car suddenly stops as the tire is punctured. Rishi keeps struggling to change the tire but Laxmi does it in one go while he attends a call.

Malishka's car runs out of fuel and stops in the middle of nowhere. Frustrated, she tries to find a way to get to Mahabaleshwar.

Malishka's mother searches for her and calls her when she can't be found.

In the car, Laxmi and Rishi keep bickering as he keeps getting distracted by her smile.

Rishi tells Laxmi that they will stay in different rooms but Laxmi insists on sharing a room.

Laxmi tells Rishi that they will have to spend only three months together and then the court itself will part their ways.

Surprised that he felt sad at the thought of Laxmi's departure, Rishi begins to act distant and weird so that Laxmi doesn't sense his feelings towards her.

Rishi tries to miss eye contact and avoids looking at Laxmi's smile because he is certain that paying attention to her will only cause him to fall helplessly in love with her.