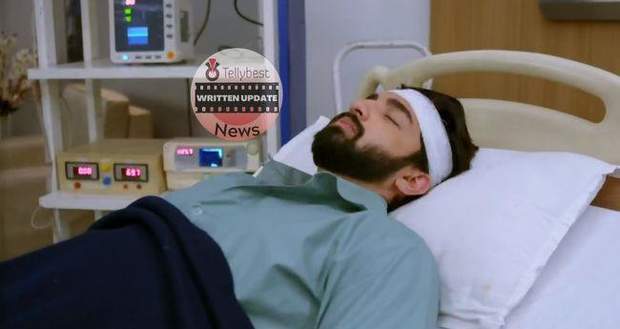 Today's Bhagya Lakshmi 26th August 2022 episode starts with Virendra telling Neelam that he is sure if she keeps doing what she's doing right now, Rishi will get away from her.

Virendra states he knows Neelam is aware of how much Rishi and Lakshmi love each other and that it is very wrong of her to make Rishi choose between his mother and his wife.

Elsewhere, Aayush feels guilty for letting Lakshmi get arrested as he stands outside the police station.

He states that he doesn't care about the punishment Neelam will give him and pulls out his phone to call Rishi.

However, he gets worried even more seeing so many missed calls from Rishi and calls him.

Rishi picks up the call and starts scolding Aayush for not picking up his calls after which Aayush hesitantly tells Rishi that Lakshmi is in jail and that it is not her fault.

Aayush tells Rishi about everything and requests him to come immediately.

Rishi also tells Aayush that he kept worrying about Lakshmi for some reason and decided to return home earlier.

After the call disconnects, Aayush hopes that there isn't any drama once Rishi learns about Neelam's threat to not save Lakshmi.

Rishi hopes that he goes home early so that he can save Lakshmi.

On the other hand, Shalu sees Aayush and tells her to come with him so that he can drop her off at home.

However, Shalu asks him with which right he is telling her which makes Aayush flustered.

Further, Shalu tells Aayush that they are breaking up and leaves to find an auto.

Aayush tries to stop Shalu from going home in an auto and manages to convince Shalu to hear him out.

Shalu comes out and Aayush vents to her saying that he will save Lakshmi at any cost as she is like a mother to him.

Shalu finally hears Aayush's words and breaks down saying that Lakshmi keeps asking about Rishi and that she will be devastated if Rishi doesn't come.

Aayush tells her that if Rishi isn't able to come, he will make sure that Lakshmi is out of jail and gives her the special 'cement promise' from his heart.

Back inside the jail, Lakshmi imagines Rishi with her inside the jail cell and smiles when suddenly Malti throws a ragged cloth toward her and tells her to go to sleep.

Elsewhere, Balwinder comes to Malishka's room to get money from her and drinks from the bottle of wine while he and Malishka plan to ruin Rishi and Lakshmi if they cannot separate them.

Malti blesses her and tells Lakshmi that her dreams of Rishi saving her will soon be a reality.