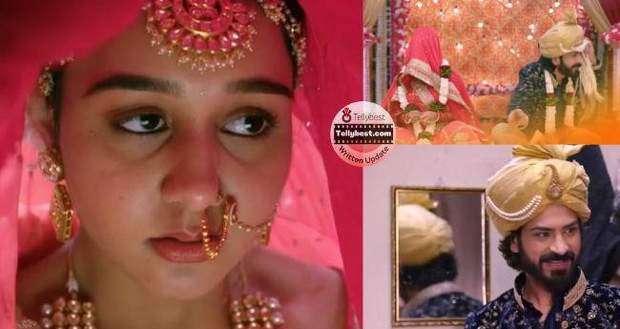 Just then, Lakshmi orders everyone to stop in a loud voice and Balwinder calls Shalu “Manjulika”  for taking Lakshmi’s place.

Rano unveils Shalu’s face making everyone grasp in shock and Ayush announces that if Shalu has married Balwinder today then what would happen to him?

When Balwinder mentions that Shalu has made his marriage a comedy movie, Shalu orders Balwinder to forget his dream about marrying her.

Balwinder clarifies that he does not want to marry Shalu and walks toward her to attack her.

Ordering Balwinder to calm down, Lakshmi explains that she thought Bani is the one who is marrying Balwinder.

Ahana who was standing beside Lakshmi yells that she is the one who took Lakshmi away.

Hearing all this, Balwinder announces that it feels like Shalu, Bani, and Lakshmi everyone wants to marry him, and his swayambar is going on.

Balwinder also calls Lakshmi a doll and announces that he will marry her in this instance only and even orders the pandit to recite the mantras for the phera ritual directly.

Lakshmi feels trapped as she does not know how she will switch her place with Kamli now whereas Kamli is anxiously waiting for Lakshmi’s call.

Meanwhile, Neelam calls Lakshmi a bad omen and gets very happy thinking now Lakshmi will be out of their life forever and before Virendra can say anything, Hraleen orders him to stay quiet.

On the other hand, Malishka calls Sonal and informs her that Rishi is unconscious.

Back in the wedding venue, Balwinder holds Lakshmi’s hand which brings the memory of Balwinder’s assault behavior back to her and her eyes get filled with tears.

Neelam is smiling while putting Lakshmi’s hand in Balwinder’s hand whereas Virendra’s face is grim.

In the meantime, Balwinder’s friends make a cheap remark about Balwinder getting a beautiful wife even after his two failed marriages and Ayush is about to hit him but Shalu stops him.

Elsewhere on the streets, Sonal praises Malishka for this while Malishka announces that Rishi will open his eyes after Lakshmi’s marriage is done.

Malishka’s cheerful mood does not last long as Rishi mutters Lakshmi’s name in his sleep.

Meanwhile, Lakshmi and Balwinder’s phera is done and the pandit orders Balwinder to lock the mangal sutra around Lakshmi’s neck.

Lakshmi’s heart starts beating like a hammer in her chest as she holds her mangalsutra tightly and the memory of Rishi locking the mangal sutra around her neck flash before her eyes.

Looking at Lakshmi, Balwinder reminds her that now Rishi’s mangal sutra is not important to her, and Rano snatches the mangalsutra from Lakshmi’s neck.

Just then, Lakshmi wakes up from her nightmare and Rano leads her to the mandap.

Before Lakshmi and Balwinder can sit for the marriage rituals, Balwinder’s aunt takes the jai mala from Shalu’s neck and puts it on Lakshmi’s neck.

On the other hand, Rishi informs Malishka that he needs to go to Lakshmi’s marriage and walks away despite Malishka’s persistence.

Finding a rock nearby, Malishka picks it up and walks towards Rishi but fails to hit him as Rishi asks her if she will go with him or not.

Back in the wedding venue, Balwinder orders the pandit to start the rituals as half of the guests are his enemy.

Lakshmi intentionally puts her saree end in the holy fire which Bani sees and the aunt announces that it is bad luck and that if Lakshmi marries in this then Balwinder will die.

While Shalu and Bani take Lakshmi, Guddu advises Balwinder to wash his face with facewash so he can look handsome.

Later, in the room, Lakshmi reveals her plan of marrying Kamli to Balwinder to her sisters.