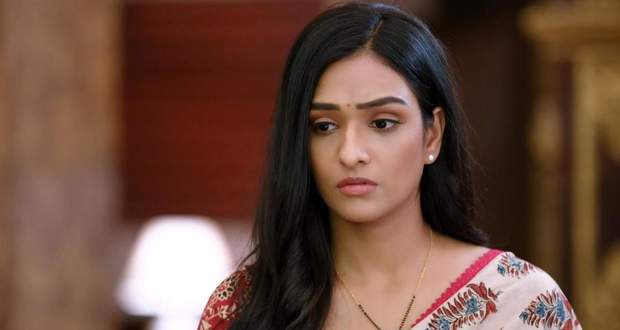 Today's Bhagya Lakshmi 26th July 2022 episode starts with Shalu taking Ayush to her home while helping him with walking.

However, Ayush quickly gets away from her hold to show off his strengths but falls to the ground due to the pain with a thud sound.

Elsewhere at the home, Neha wakes up and tells her mom scaredly that there must be a ghost in their house.

However, Rano picks up a stick to teach the ghost a lesson and when Bani opens the door, Ayush falls onto her.

Seeing a strange guy on Bani’s top, Rano starts beating him with a stick but Shalu stops her.

Ayush then tells them about his fight with Balwinder and asks Bani to call Lakshmi.

However, Rano and Neha urge him to stay with them tonight.

After Shalu leaves with Ayush, Rano scolds Neha for not taking Ayush’s care like Shalu.

Later in the room, while Shalu prepares the bed for Ayush, he calls Lakshmi to inform her about his situation.

Hearing Ayush’s voice, Lakshmi starts questioning him about his well-being.

After telling Lakshmi about his staying at Bajwa's house, he urges her to keep quiet till he reaches home.

Lakshmi along with Rishi agrees to stay quiet.

Ayush then tells them about Shalu being super caring for him and he and Shalu lock eyes with each other.

Afterward, they again get into a cat fight but Lakshmi calms them down.

After Ayush cuts the call, Rishi calls Virendra and informs him about Ayush’s safety.

After he goes to inform Karishma and Hraleen about it, Neelam feels confused as Ayush has forgotten his phone at home.

Rano then takes Neha aside to scream at her for not taking care of Ayush like Shalu.

At first, Neha tries to deny it but when Rano reminds her that Shalu will be queen, she agrees to follow.

Malishka even announces that she will go underground as she does not want to go to jail.

© Copyright tellybest.com, 2020, 2021. All Rights Reserved. Unauthorized use and/or duplication of any material from tellybest.com without written permission is strictly prohibited.
Cached Saved on: Saturday 1st of October 2022 09:07:02 PMCached Disp on: Monday 3rd of October 2022 08:00:09 PM