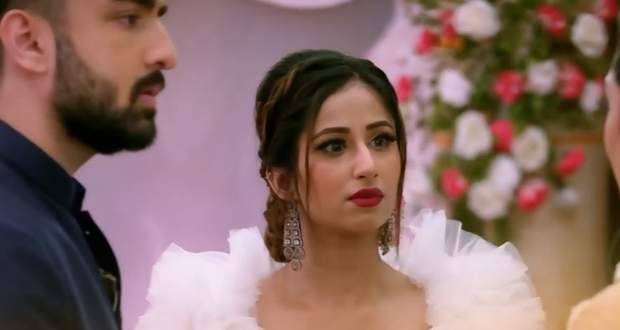 Rishi gets annoyed at the lecture and tells Malishka to not waste time on such an important occasion with Lakshmi who will soon be his ex-wife.

Just then Shalu comes in and defends Lakshmi and tells Malishka that this is just a fancy party and not an engagement party.

Afterwards, Malishka invites Lakshmi to dance with her if she doesn't really care for Rishi and Malishka’s engagement.

Just then Malishka and Lakshmi come dressed in similar costumes and performed a face-off dance which makes Rishi awkward.

Lakshmi saves Malishka from falling on a bannister but hurts herself.

Later, Lakshmi locks herself in her room.

Balwinder who is disguised as a waiter tries to enter Lakshmi's room but Shalu’s voice stops him.

Shalu knocks on Lakshmi’s door asking her to let her but Lakshmi asks her to leave her alone.

Shalu feels angry at Oberoi for not caring for Lakshmi.

Meanwhile, Kiran is tending to Malishka when Rishi leaves to find his cuff link.

Neelam observes Rishi’s stress but Malishka assures them that Rishi has completely changed and does not care for Lakshmi anymore.

After a while, Malishka is ready to be engaged.

Meanwhile, Lakshmi is crying her heart out at the injustice of the situation and feels helpless at not being able to stop Rishi from getting engaged to Malishka.

Just then Rishi knocks at the door raising Lakshmi's hope.

However, Rishi rudely enters the room and goes into the bathroom.

In the meantime, Shalu shames Aayush for not speaking up for Lakshmi and not caring for Lakshmi anymore. She reminds him of all the things Lakshmi has done for him and is still alone.

A while later, Rishi comes to tend Lakshmi's hand silently while Lakshmi looks at him gratefully.

As Rishi finishs dressing Lakshmi’s wound, he spots Malishka at the door and gets shocked.