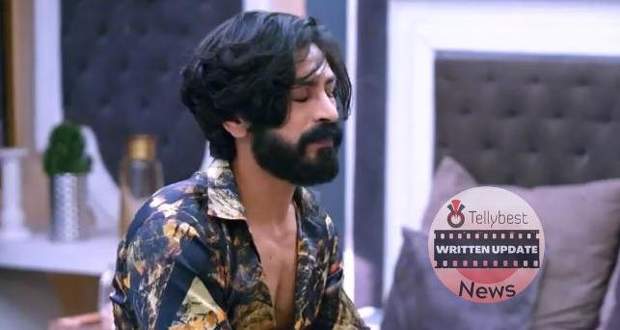 Today's Bhagya Lakshmi 26th October 2022 episode starts with Rishi getting released from all the charges and Malishka and Ayush hug him happily while Lakshmi shyly smiles at him.

The police officer praises Lakshmi’s love for Rishi as she got the pen drive which proved his innocence.

Hearing Lakshmi’s praise, Malishka gets angry as no one is praising her efforts.

On the other hand, Balwinder enters the room furiously as he became the villain and Malishka became the hero and kicks the side table furiously.

However, Kiran hears the crashing sound and recalls Rishi’s warning of Balwinder entering the house to hurt her.

Scared Kiran picks up a bat and walks towards the room.

On the other hand, Ayush sends Rishi and Lakshmi on a date to let Rishi express his gratitude to Lakshmi for saving him.

Rishi praises Lakshmi and declares that she will live with him forever but Malishka says Lakshmi will leave him after the divorce.

Ayush scolds Malishka’s black tongue but she tells them that the divorce will happen anyhow.

However, Rishi offers her hand to Lakshmi while saying that they never know what happens in the future.

Lakshmi puts her hand in Rishi’s hand and ruins Malishka’s plan of destroying their date.

Later, both Rishi and Lakshmi help each other wear the helmet and drive off while Malishka glares and grinds her teeth in anger.

In the car, Ayush enjoys Malishka’s sadness but she calls him the driver and he stops the car in between the road.

On the other hand, Kiran sees Balwinder and tries to lock the door but he holds the gate tightly.

Kiran accuses him of betraying Malishka but he refuses and tells her to call Malishka.

However, Kiran does not let Balwinder call Malishka as she is with Rishi.

Frustrated Balwinder sits in a donkey position and tells Kiran to beat him.

Balwinder thinks that he needs to lick Kiran’s feet because he has no place to live and money to survive.

Elsewhere, Lakshmi tells Rishi about her dream of living with her husband forever and he stops the bike.

After some time, Malishka enters her room and screams at Balwinder for ruining her plan and trying to kill Rishi.

Malishka beats Balwinder with a bat and beats him until the bat loses its shape.

When Balwinder hears from Malishka that Lakshmi and Rishi went on a date he loses his temper.

Kiran asks Malishka if she asked the loafer (Balwinder) to live in their house and to Balwinder's surprise Malishka refuses.

On the road, Rishi tells Lakshmi that he is going to fulfil her dream of roaming with her husband in the valleys of nature.

However, Lakshmi tries to make excuses but Rishi shushes her saying he is her only husband.

Both walks on the sidewalk and Rishi hold Lakshmi’s hand romantically and talks about Lakshmi's dream.

© Copyright tellybest.com, 2022, 2023. All Rights Reserved. Unauthorized use and/or duplication of any material from tellybest.com without written permission is strictly prohibited.
Cached Saved on: Monday 21st of November 2022 07:05:34 AMCached Disp on: Thursday 1st of December 2022 01:35:20 AM