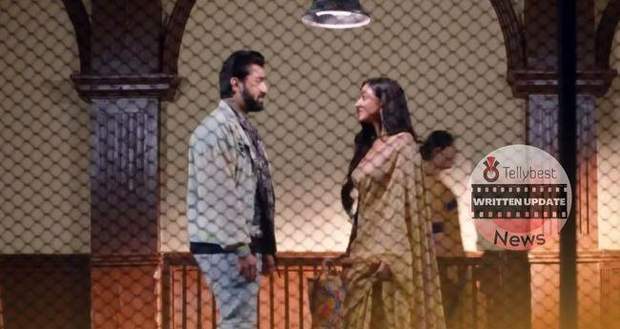 Today's Bhagya Lakshmi 26th September 2022 episode starts with Rishi asking Lakshmi if she is jealous or not.

When Lakshmi looks at Rishi with confusion, Rishi clears his throat and tells Lakshmi in a teasing voice that lovers always get jealous whenever a third person gets close to the other person.

Telling this, Rishi pulls Lakshmi close and locks his eyes with her.

While Lakshmi looks shy, Rishi again teases her by announcing that no husband can live with a goon wife.

This makes Lakshmi angry and she starts bickering with Rishi by urging him to meet Malishka.

On the other hand, while discussing Rishi getting surprised by Lakshmi with Shalu, excited Ayush hugs Shalu tightly.

Realizing this, Ayush quickly lets go of Shalu and they start staring at each other.

Lakshmi and Rishi beg the constable to let them stay for some more time but the ignorant constable orders Lakshmi to leave anyway.

Afterward, Lakshmi comes running to the police officer's table to beg the officer to give her some more time as she needs to tell Rishi something important.

Seeing Lakshmi, Ayush and Shalu also join her in this but the police officer denies it.

On the other hand, in the Oberoi mansion, Malsihka is screaming in her room in anger while recalling Rishi and Lakshmi’s interactions.

At the same time, Kiran enters the room and tries to calm her down but Malishka announces in fear that she thinks their lies will come out soon.

Later, outside the police station, Shalu starts scaring Ayush by announcing that Lakshmi behaves like an angry woman.

This works as Ayush gets sacred and decides to do everything to melt Lakshmi’s anger.

When Lakshmi arrives there, Ayush stands on one foot with his hands on his ears.

Seeing this, Lakshmi urges Ayush to stop and tells him to arrange a meeting with Rishi again so she can finish her talk with Rishi.

Ayush agrees and starts thinking about a plan.

Meanwhile, in the Oberoi mansion, Virendra is consoling Harleen by announcing that soon Lakshmi will get Rishi out of jail.

Virendra then gets a call from his manager who informs him about Rishi’s jail news being viral.

Hearing this, Virendra announces that he will handle it.

In the meantime, in jail, Ayush and Shalu distract the police by lying that their things are stolen.

On one hand, Shalu mentions her hairpin is lost and on the other hand, Ayush announces that Shalu has taken his heart.

While everyone is busy, Lakshmi runs towards Rishi’s jail.

Meanwhile, in the Oberoi mansion, Soniya informs Karishma that there is something going on between Ayush and Shalu.

© Copyright tellybest.com, 2020, 2021. All Rights Reserved. Unauthorized use and/or duplication of any material from tellybest.com without written permission is strictly prohibited.
Cached Saved on: Saturday 1st of October 2022 09:04:45 PMCached Disp on: Thursday 6th of October 2022 04:56:13 PM