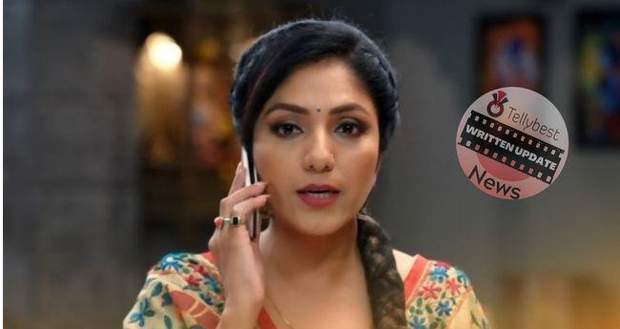 Today's Bhagya Lakshmi 27th August 2022 episode starts with the warden telling Lakshmi that someone has come to meet her.

Lakshmi gets hopeful thinking that it's Rishi but gets surprised to see Malishka who introduces herself as Malishka Rishi Oberoi.

Malishka mocks Lakshmi for dreaming about Rishi saving her and tells her that she is going to take back her place and will become Rishi's wife.

On the other hand, Rishi calls Aayush and thanks him for informing him about Laksmi being in jail.

However, it is Kiran on the other side who tells Rishi to come home first.

Kiran sees Neelam passing by them and starts talking to Aayush and scolding him for informing Rishi about Lakshmi being in jail.

Neelam comes there furiously and orders Aayush to come downstairs after which Aayush confronts Kiran telling her that he knows brought up the conversation knowing Neelam was passing by.

However, Kiran tells him to stay within his limits and leaves.

Back at the jail, Malishka humiliates Lakshmi and tells her that she will be alone her whole life since she will be declared a criminal.

Malishka reveals that two people from food poisoning are fighting between death and life.

Lakshmi cries saying that she didn't do anything while Malishka informs her that no one will save her, not even Rishi since he doesn't know about her being in jail.

Lakshmi states that she knows Rishi will save her as she knows from his eyes that he loves her.

Malishka mockingly tells Lakshmi to see the love for Rishi in her eyes too but Lakshmi states that she can only see the ego in Malishka's eyes.

At the Oberoi house, Neelam gathers the family in the hall and makes Aayush confess that he went against her and told about Lakshmi to Rishi.

Karishma gets angry at Aayush and starts insulting him while Ahana tries to stand up for her brother.

Karishma threatens to slap Aayush while he tells her that he is ready to get beaten if she can see that Lakshmi is innocent.

Ahana comes to Aayush's rescue and starts speaking in support of Lakshmi.

Soniya comes forward and starts arguing with Aayush and Ahana which upset Neelam.

She beats all three of them and blames Lakshmi for the arguments happening in the house.

Malishka comes there just then and starts talking ill about Lakshmi being the reason for the family's downfall.

Malishka and Aayush get into an argument as Rishi arrives there and asks about Lakshmi.

The family informs her that Lakshmi is still in jail and Rishi starts questioning Kiran as to why she lied.

Meanwhile, Rano calls Balwinder and tells him to come to the police station with her but he refuses.

Rishi learns that Neelam has prevented anyone from helping Lakshmi and gets disappointed.

© Copyright tellybest.com, 2020, 2021. All Rights Reserved. Unauthorized use and/or duplication of any material from tellybest.com without written permission is strictly prohibited.
Cached Saved on: Friday 30th of September 2022 11:30:35 PMCached Disp on: Saturday 1st of October 2022 12:52:39 AM