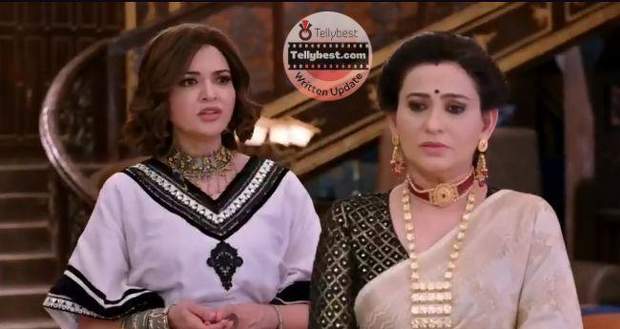 Today's Bhagya Lakshmi 27th December 2022 episode starts with Ayush apologising to Shalu for not being able to support Lakshmi and telling her determinedly that he will do everything in his power to bring Lakshmi and Rishi back together.

Just then Ayush spots Balwinder at the bar and decides to wait for the person who he is waiting for.

Meanwhile, Balwinder is babbling about Malishka who has called him after such a long time and now making him wait.

Elsewhere, Neelam and Karishma ask Rishi whether Lakshmi has come with him or not.

However, Rishi gets agitated and tells them that they got their wish as Lakshmi refused to come with him.

Right behind Rishi, Rano comes to the Oberoi house and tells Karishma and Neelam that Lakshmi has changed her mind and now she wants alimony.

Neelam and Karishma insult Rano and tell her that she will not get a dime from them.

However, Rano is equally stubborn and tells Neelam and Karishma that she will throw every arrow in her repertoire to get the money from them.

Meanwhile, Ayush and Shalu are waiting for Balwinder's accomplice and at the same time beat him to a pulp.

Just then Malishka arrives at the bar but spots Ayush and Shalu before they can see her.

Taking a step backwards, Malishka leaves the premises at speed and wonders what Shalu and Ayush are doing here.

After a while, she calls Balwinder and asks him to meet outside as Shalu and Ayush are following him.

Balwinder tells Malishka that she always brings danger in tow and tells her that he will meet her outside.

Seeing Balwinder paying the bill, Shalu and Ayush decide to follow him although they wish to beat him.

Later, Balwinder tricks them by pushing the waiter in their way and escaping before they can notice.

On the other hand, Harleen is feeling remorse at Lakshmi’s departure and asks Devika to call her so that she can hear her voice and check up on her.

Lakshmi also sounds sad and tells Harleen about Rishi coming to take her back but she refused him.

Harleen favours Lakshmi’s decision and tells her to not return until she is brought back with the respect she deserves.

Afterwards, Harleen tells Devika that only that will happen which is written in their fate but she hopes that Lakshmi gets to come back to the house with honour and respect.

Meanwhile, Balwinder arrives at Malishka’s car and tells her that no one is following him.

Malishka tells him that Rishi and Lakshmi are divorced and now she will be living at her aunt Rano’s place.

Balwinder becomes super excited and tells her that he is so happy that he can break through this car roof.

Malishka tells Balwinder that he will have to marry Lakshmi now so that Rishi and Lakshmi can never get together.

Balwinder promises her that this is exactly what will happen and now Lakshmi and Rishi will never again come together as he will always be between them.

Meanwhile, Sonal tells Kiran to talk to Neelam about Rishi and Malishka’s marriage.

Elsewhere, Balwinder is getting drunk enjoying the news of Laskhmi’s divorce.

© Copyright tellybest.com, 2022, 2023. All Rights Reserved. Unauthorized use and/or duplication of any material from tellybest.com without written permission is strictly prohibited.
Cached Saved on: Wednesday 25th of January 2023 01:54:33 PMCached Disp on: Wednesday 1st of February 2023 10:19:12 PM