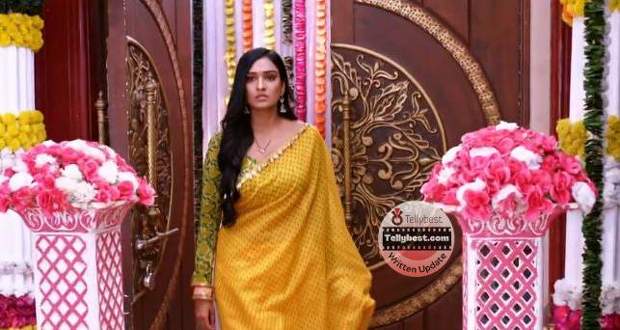 Today's Bhagya Lakshmi 27th January 2023 episode starts with Lakshmi hugging her sisters when they mention they are pleased that Lakshmi is not getting married to Balwinder.

When Bani informs Lakshmi that she does not know how miserable they were in this last few days, Lakshmi announces that all this happened to lead her to Kamli so she can save her from attempting suicide.

Bani excitedly adds that she knows Lakshmi and Rishi can never separate which causes the color to drain from Lakshmi’s face.

On the one hand, Bani, Shalu, and Lakshmi are discussing their plan to make Kamli’s marriage happen with Balwinder; on the other hand, Malishka asks Rishi why he is going to the wedding venue as Lakshmi’s marriage is done already.

Later, while Balwinder is telling himself that his friends are useless and all they care about is alcohol, he hears a knock on the door and when he opens it, Rishi punches him in the face.

Rishi calls Balwinder a monkey and Balwinder reminds Rishi that he is the one who is screaming.

At the same time, entering the room, Ayush gets happy as now Rishi will not let Lakshmi marry a fool and orders Rishi to fight Balwinder hard.

Rishi then hits Balwinder’s nerve by hitting his collarbone causing him to fall unconscious.

When Ayush mentions that he was about to make Lakshmi elope but his plan failed due to Balwinder’s stupid goons, Rishi asks him about Lakshmi’s location.

Rish calms down as Ayush reveals that Lakshmi returned to the venue to marry Balwinder.

Rishi further announces that instead of Balwinder he will marry Lakshmi in the mandap which makes Ayush extremely happy and he mumbles that now Lakshmi and Rishi will be back together again.

On the other hand, Rano arrives there to announce that she will sit here till Lakshmi gets ready and when Bani says that they are here with Lakshmi, Rano tells them that they are the reason that she needs to sit in the room.

Meanwhile, in the venue, Virendra, Harleen, and Ahana are praising Lakshmi for sacrificing her life for her sisters when Neelam accuses Lakshmi and her bad luck for this.

Neelam starts putting Lakshmi down and Virendra reminds her about the time when Lakshmi’s luck was needed for Rishi’s life which shuts up Neelam.

On the other hand, Rishi ties Balwinder to a chair and puts a piece of cloth in his mouth, and wears his sherwani leaving Balwinder in just his undergarment.

Rishi puts the veil on his head with a disgusted look on his face as it is smelling sweat and Ayush helps him.

Later, Kamli is waiting for Lakshmi’s call anxiously as she needs to marry Balwinder whereas Malishka decides to check on Rishi while cursing Lakshmi.

She is walking towards the hall when she notices Kamli sitting behind a car and gets confused.

Malishka orders Kamli to reveal what she is doing here but Kamli does not answer.

Back in Lakshmi’s room, Rnao tells Lakshmi that now nothing will happen in this marriage when Shalu sarcastically remarks that Rano is very caring.

Hearing this, Rano states that she is very caring and Shalu orders her to marry Neha to Balwinder.

After Rano walks away feeling irritated and Bani puts down Lakshmi’s veil and Shalu orders Kamli to come to the room.

Meanwhile, Malishka gets shocked to see Rishi not in the venue and Neelam asks Ayush about it who lies that Rishi is busy with work.

When Malishka calls Rishi, he lies that he is outside as he cannot see Lakshmi marrying cheap Balwinder.

© Copyright tellybest.com, 2022, 2023. All Rights Reserved. Unauthorized use and/or duplication of any material from tellybest.com without written permission is strictly prohibited.
Cached Saved on: Thursday 26th of January 2023 11:57:57 PMCached Disp on: Thursday 2nd of February 2023 08:30:21 PM