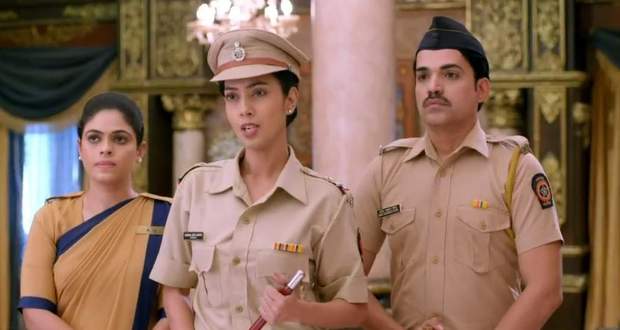 Before Ayush can react, she quickly calls him a guest and urges Neha to dress Ayush’s wound.

However, Neha quickly excuses herself to go washroom, while Bani smirks.

After Rano leaves, Ayush and Shalu again get into an argument about him being extra nice to Rano.

Hearing this, Ayush reminds her that he is staying with Rano so he needs to show her respect.

Bani agrees with him and Ayush teases Shalu for being dumb.

Elsewhere in the Oberoi mansion, seeing Lakshmi taking her clothes out from the wardrobe, Rishi urges her to take him with her wherever she is going.

When Lakshmi denies him, he takes her every saree and refuses to give her back.

He even grabs Lakshmi’s hands and they both fall onto the bed.

Before Rishi can say anything, Lakshmi quickly gets up from bed.

Rishi however mentions that Lakshmi’s heart wants to stay close to him.

While Rishi asks her why she did not mention it first, she says that she wanted to see Rishi’s reaction.

After Lakshmi leaves, Rishi announces that he only wants Lakshmi’s happiness.

On the hand in the bathroom, Lakshmi feels shy while thinking about her and Rishi’s closeness.

When Neha denies it, Rano scolds her for not getting close to Ayush.

After Rano goes to call Shalu for help, confused Neha thinks to herself if she needs to put milk in a turmeric container to make the milk.

Elsewhere in Oberoi's mansion, while Lakshmi is drying her hair, some water droplets fall on Rishi’s face which causes him to wake up.

Seeing Rishi in front of her, Lakshmi calls him a liar.

To prove his point, Rishi puts Lakshmi’s hand on his face, and noticing the water, Lakshmi apologizes.

When Rishi asks Lakshmi to put her hands on her ears, she slaps him lightly.

Seeing this, while Rishi asks Lakshmi about it, she says love but closes her mouth.

At the same time, Rano again starts buttering Ayush about Neha and offers him milk.

Ayush somehow manages to drink it.

The next morning, Durga announces that she needs to find the mastermind behind Balwinder's tactics.

© Copyright tellybest.com, 2020, 2021. All Rights Reserved. Unauthorized use and/or duplication of any material from tellybest.com without written permission is strictly prohibited.
Cached Saved on: Sunday 2nd of October 2022 03:21:55 AMCached Disp on: Thursday 6th of October 2022 05:06:55 PM