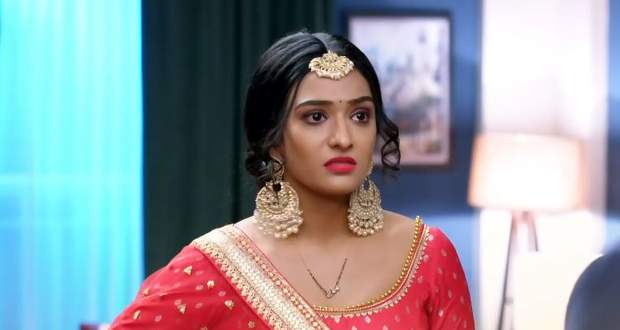 Today's Bhagya Lakshmi 27th May 2022 episode starts with Ayush telling Shalu that everyone in the Oberoi family is right for not taking Lakshmi’s side.

Hearing this Shalu gets upset and walks away from there.

Meanwhile in Lakshmi’s room Rishi explains to Malishka that he is nursing Lakshmi’s wound just because she has saved Malishka today.

Malishka is happy with Rishi’s answer and then she asks Rishi to come with her for the engagement.

Before walking away Malishka invites Lakshmi to see her and Rishi’s engagement.

While Rano is expressing her opinion about Laksmi’s bad fortune, Neha announces that Shalu is responsible for Rishi’s engagement.

Hearing this Shalu gets motivated and runs to talk to Rishi but she mistakenly collides with Malishka and drops juice on her dress.

It triggers Malishka’s anger and she starts shouting at Shalu but Rishi calms her down.

Shalu then says that she is the reason behind Malishka’s engagement with Rishi.

Shalu further says that Malishka has purposefully lied to the media so Lakshmi’s name gets dirty.

Angry Shalu then confesses that she is the one who called the Women protecting service on Malishka.

Hearing this Rishi is shocked and says that Lakshmi is behind this news but Shalu denies it and asks him to think with his heart he will find the answer.

Later Shalu goes to Lakshmi’s room and asks her about Lakshmi’s internal wound.

Seeing Shalu Lakshmi breaks down in tears and confesses that she loves Rishi.

On the other hand, Rishi asks why Malishka has not defended herself in front of Shalu.

Instead of answering Rishi, Malishka asks Rishi if he will believe people if they claim that Lakshmi is innocent.

To Malishka’s surprise, Rishi replies that yes he will believe those people.

Meanwhile, in Lakshmi’s room, Shalu tells Lakshmi that Rishi loves her and out of anger he is getting engaged to Malishka.

At first, Lakshmi denies it by claiming Rishi loves Malishka but after hearing Shalu’s words she is convinced that Rishi loves Lakshmi.

Shalu further tells Lakshmi that they are both stubborn.

Hearing this, Lakshmi gets motivated and runs toward Rishi.

Meanwhile, Kiran urges Rishi and Malishka to get ready for the ceremony.

In the end, Balwinder changes his plan and decides to push Lakshmi from the stairs as it will hurt Rishi as well.