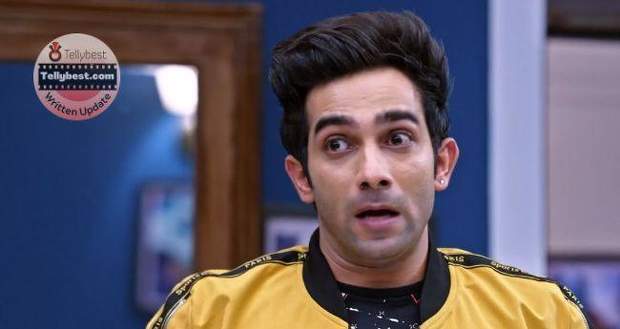 Today's Bhagya Lakshmi 27th November 2022 episode starts with Rishi waiting in his car when he notices a Burkha woman entering the car and driving away.

Meanwhile, Ayush gets a call from Shalu who asks him if Lakshmi is okay to which Ayush replies frustratingly that he feels helpless for not being able to save Lakshmi.

Shalu however calmly tells Ayush that she knows nothing will happen to Lakshmi as she is innocent.

On the other hand, Balwinder notices Rishi’s car following him and with a smirk, he takes a turn and successfully dodges Rishi’s car.

While Balwinder is driving, Lakshmi hopes the car driver is one of Malishka’s kidnappers so she can rescue Malishka.

Later Balwinder stops his car when he arrives near the godown and he walks away without checking the back seat.

Lakshmi comes out of the car as soon as she hears Balwinder’s footsteps fading and looks around for Rishi.

When Rishi does not show up, Lakshmi decides to investigate the matter on her own.

In the meantime, Malishka starts laughing when Balwinder lifts his veil, and irritated Balwinder replies that he was trying to hide from Rishi.

Malishka then questions Balwinder if Rishi’s tail, Lakshmi was also with him to which Balwinder replies negatively.

Malishka further happily announces that she needs to stay away from Rishi for this night only and from the next day, she and Rishi will be together.

She even praises Balwinder for his support, adding that she will give him a huge amount of money, making him kneel in front of her with happiness.

He informs Malishka that he will go to Bangkok with that money while Malishka mutters that Balwinder has a small mind.

On the other hand, in the Oberoi mansion, Ayush is constantly switching on-off the light while thinking the police will come anytime to take Lakshmi away.

Meanwhile, Rishi gets worried for Lakshmi when he realizes his phone is switched off due to low battery and now he has no way to track Lakshmi.

Later, Malishka orders Balwinder to stay alert and Balwinder goes out to guard the godown.

Lakshmi is looking around the godown when Balwinder passes by her unnoticed.

Meanwhile, Harleen orders Ayush to call Lakshmi, and picking up the call, Lakshmi quickly adds that she is okay.

Malishka however hears Lakshmi’s ringtone and finds her in the hall.

After thinking she will finish Lakshmi today, Malishka attacks Lakshmi while wearing the Burkha as a disguise.

Lakshmi pushes Malishka back during the fight causing Malishka to fall due to which Malishka’s veil lifts.

On the other hand, Rishi arrives at the hideout and beats Balwinder and Balwinder points to the godown before falling conscious.

Meanwhile, Lakshmi snatches the knife away from Malishka’s hand but before she can see the face, Malishak runs away.

Rishi then finds Malishka running and orders her to lift the veil.

© Copyright tellybest.com, 2022, 2023. All Rights Reserved. Unauthorized use and/or duplication of any material from tellybest.com without written permission is strictly prohibited.
Cached Saved on: Saturday 26th of November 2022 11:28:16 PMCached Disp on: Tuesday 6th of December 2022 01:13:34 PM