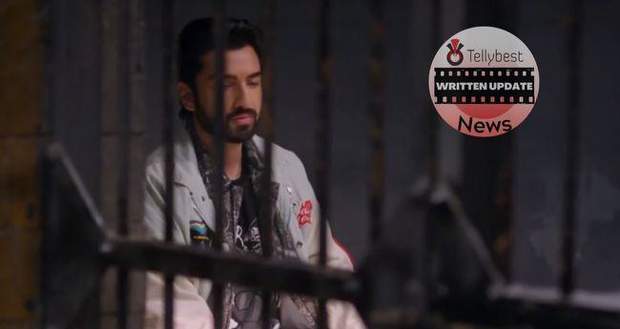 Today's Bhagya Lakshmi 27th September 2022 episode starts with Balwinder peeping into the house but getting caught by Rano.

He asks to speak low but Rano informs him about Lakshmi’s crime charges taken by Rishi.

Hearing this, Balwinder realizes that he was predicting wrong about Rishi’s disloyal love for Lakshmi.

On the other hand, in jail, Lakshmi promises Rishi that she will bring Rishi out of jail.

Rishi assures her that he doesn't need a promise from her as he knows that she will not let him live here.

While looking at each other romantically, Lakshmi urges Rishi to say what is in his heart but Rishi just says all the best to Lakshmi.

After Lakshmi walks away, a prisoner appreciates Lakshmi’s love for Rishi.

Meanwhile, Rano teases Balwinder saying he will indeed get caught as the Oberoi family will unite ground and Sky to find the real culprit.

She takes money from him and asks for more while Balwinder thinks of planning something to become a hero like Rishi to achieve Lakshmi.

In the meantime, Malishka feels helpless as she is not sure how to free Rishi without getting herself stuck.

At the same time, Ayush jokingly announces that their mission is accomplished but the police officer orders them to leave.

While Lakshmi is thinking about Rishi outside, Shalu and Ayush approach her.

When Lakshmi thanks Ayush and Shalu for arranging the meeting, Shalu starts narrating how Ayush accused Shalu of stealing his heart.

As expected, Ayush and Shalu get into a catfight while Lakshmi just smiles at them.

Later during the car journey, Lakshmi starts observing Ayush and Shalu closely and thinks maybe they like each other.

Afterward, in the Oberoi mansion, Lakhsmi goes to Harleen’s room to give her soup and notices Karishma there.

As expected, Karishma walks away after announcing that Lakshmi is here.

Later in the night, Lakshmi decides to sleep on the floor just like Rishi.

On one hand, Lakshmi is telling Rishi to dream about her, and on the other hand, Rishi is also thinking the same.

At the same time, Shalu arrives there and advises Lakshmi to seek help from Virendra to get CBI in order to get Rishi out of jail.

Hearing this, Lakshmi announces it will take a very long time so they should start investigating on their own.