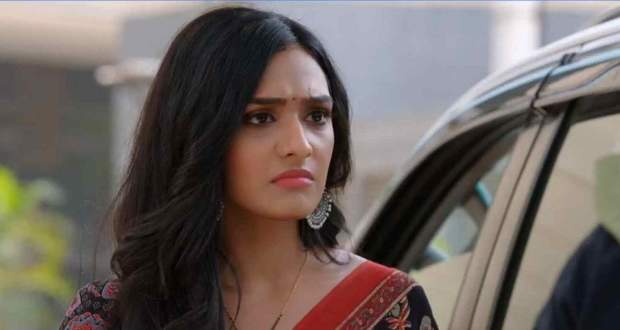 Today's Bhagya Lakshmi 28th April 2022 episode starts with Rishi bragging about his charms and saying that anyone would fall in love with him.

When Lakshmi refuses to be in love with him, Rishi makes a grumpy face just to make Lakshmi speak the truth.

Seeing this, Lakshmi confesses that she really likes being around Rishi.

In the meantime, Malishka receives her bag full of clothes sent by Kiran.

Malishka gets dressed in a hot outfit and compliments herself for looking sizzling.

On the other hand, Rishi and Lakshmi continue to have their typically married couple fights.

After some time, Lakshmi gets a video call from her sisters.

While Lakshmi brags about controlling Rishi, Rishi overhears her.

Further, Rishi takes the mobile but Lakshmi informs him that Baani is tensed for her.

So, being considerate, Rishi informs Baani that Lakshmi is too bossy in a diplomatic manner which makes Lakshmi adore him.

Later, when Malishka goes to surprise Rishi, Kiran asks Malishka not to meet Rishi until Lakshmi is with him.

Meanwhile, while Rishi and his client, Paritosh are about to start their meeting, Paritosh's NRI friend, Ronit arrives there.

Ronit and Rishi introduce themselves and Paritosh asks Ronit to leave them alone for the meeting.

At the same time, Lakshmi arrives at the hotel looking gorgeous as she is dressed beautifully in an orange saree.

Ronit spots Rishi staring at Lakshmi and says that his wife would be angry with him if she finds that he is leering at some other girl.

Rishi clarifies that Lakshmi is his wife.

So, Lakshmi mixes the medicine in the water and asks the waiter to give it to Rishi.

Malishka witnesses this and misunderstands that Lakshmi is drugging Rishi.