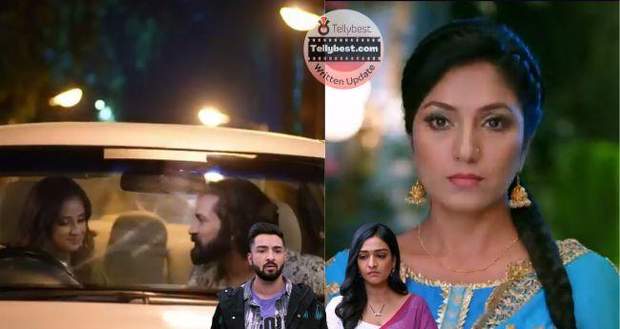 Today's Bhagya Lakshmi 28th December 2022 episode starts with Rano telling everyone that she has a headache due to Karishma’s wrong behavior.

Rano yells that Lakshmi is responsible for this since she is the one who has not gotten the money while Lakshmi sits there still.

Shalu even reminds Rano that she is the one who has not allowed them to get a job but Rano yells that she does not want people to gossip about her not being able to take care of her nieces.

Rano further screams at Lakshmi for ruining her plans while Lakshmi looks at her with guilty eyes.

On the other hand, in the Oberoi mansion, Neelam and Karishma are discussing Harleen’s dinner at the table when Devika, Rishi, and Ayush join them.

When Karishma tells Rishi that today his favorite foods are cooked, Rishi announces that it will not taste like Lakshmi’s.

Rishi even mutters that he was used to Lakshmi’s presence and Devika questions Rishi if he misses Lakshmi or her cooking.

While Rishi looks surprised, Ayush announces that Rishi needs to eat so he can find a solution.

Meanwhile, Neelam orders Karishma and Ayush to focus on eating as it is dinner time and Rishi starts smiling like a fool when the servants serve him food.

Imaging Lakshmi in front of him, Rishi calls out to her whereas Neelam and Karishma get irritated but Ayush grins.

Later that night, while Shalu and Bani are discussing the reason behind Lakshmi-Rishi’s divorce, Lakshmi arrives there and Shalu questions Lakshmi about what happened that night that caused the divorce.

Recalling Rishi and Malishka’s intimate image, Lakshmi urges Shalu not to think about it and everyone falls asleep.

On one hand, Rishi is missing Lakshmi terribly and imagines her everywhere; on the other hand, Lakshmi is also not able to fall asleep.

Both of them then wish each other well-being and close their eyes.

The next morning, Rishi is sleeping when Malishka puts her arms around him to wake him up.

Entering the room just then, Karishma gets very happy to see Malishka and Rishi close to each other but Rishi announces that he was sleeping.

After Rishi walks away, Karishma orders Malishka to win Rishi’s heart once again while Malishka thinks that Rishi has always been hers.

On the other hand, looking at himself in the mirror, Balwinder says that he looks like a hero and Lakshmi and he will look like a hero-heroin together.

Meanwhile, in Oberoi's mansion, Malishka thinks now Karishma will help her to execute her new plan when Rishi approaches her to apologize.

Malishka then tells Rishi that she is unsure if she should be happy or not while Rishi looks upset.

Malishka further orders Rishi to come to the office with her for a meeting who denies it but Malishka advises Rishi not to mix his personal life and professional life.

In the meantime, Neelam enters Harleen's room to give her medicine and Harleen announces that Lakshmi has given Devika the instruction about the medicines.

While Neelam tells Harleen that she will make the house just the way it was before Lakshmi's arrival, Harleen gets upset as Lakshmi is the only one who keeps the family united.

On the other hand, Lakshmi gets shocked to see Balwinder hugging her from behind and Balwinder just grins at her.

© Copyright tellybest.com, 2022, 2023. All Rights Reserved. Unauthorized use and/or duplication of any material from tellybest.com without written permission is strictly prohibited.
Cached Saved on: Thursday 26th of January 2023 03:09:36 AMCached Disp on: Wednesday 1st of February 2023 06:04:06 PM