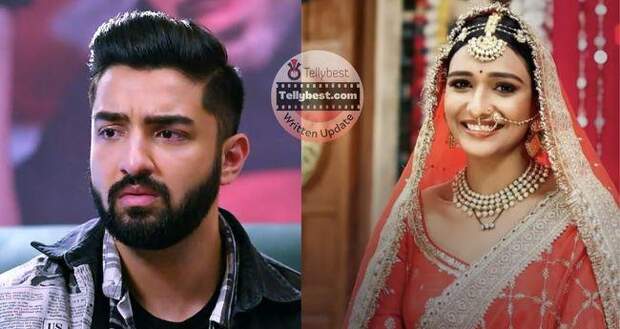 When Balwinder’s aunt mentions that she is doing what Balwinder told her to, Rano asks her if she will lie on the train tracks if Balwinder asks.

Balwinder’s aunt walks away and Lakshmi lies that she needs to put deodorant on herself and runs into the room leaving Rano confused.

Entering the room, Lakshmi orders Shalu to push her from behind so she can fall forward and some perfume can get into Rano’s eyes which will give them some time.

As planned, Shalu pushes Lakshmi forward and the perfume gets into Rano’s eyes, making her eyes burn while Lakshmi takes Kamli into the room.

Shalu puts a wet cloth on her face while Bani pretends as if Lakshmi is still there with them and urges Lakshmi to sit beside Rano so they can walk together.

Meanwhile, Lakshmi puts the dupatta on Kamli’s head and Kamli praises Lakshmi for helping her as not even her sister will do this.

Kamli says that she was going to die that day but Lakshmi has given her new life.

Lakshmi refuses to take the credit and reminds Kamli not to lift her veil at any cost.

Afterward, Lakshmi brings Kamli outside and announces that she will remove the cloth but moves away resulting in Kamli doing it.

Thinking it is Lakshmi, Rano takes her to the mandap while Bani and Shalu follow her.

On the other hand, Ayush desperately waits for Rishi to come and thinks to himself that someone will burn today out of jealousy while glaring at Malishka.

He takes Rishi’s name but when Malishka inquires about Rishi, Ayush adds that Rishi cannot bear seeing Lakshmi getting married to someone else.

Just then, Rishi arrives there with a veil on his head and Balwinder’s friends comment that Balwinder’s walk is completely different.

Guddu tries to lift Rishi’s veil to check if Balwinder’s face is glowing or not but Rishi holds his hand before he can touch the veil.

Meanwhile, Kamli is walking towards the mandap thinking now she will marry Balwinder and everything will be alright.

In contrast, Guddu whispers to Rishi’s ear that this time real Lakshmi will do the rituals as her sisters are walking by her side.

When the marriage rituals start, the pandit asks about the jai mala and Guddu announces that he will bring it.

Shalu stops Guddu by saying that the jai mala are used so they do the rituals without it whereas Ayush worries about Guddu discovering Balwinder in the room.

The pandit agrees to Shalu’s words and starts reciting the mantras while Shalu smiles widely.

Noticing Shalu’s smile, Guddu asks her why she is so happy suddenly as she was trying to destroy the wedding just a few moments ago.

Shalu informs him with a sad face that Lakshmi has told them to accept the marriage.

Meanwhile, Ayush thinks Rishi and Lakshmi’s fates are connected with each other while glaring at Malishka.

On the other hand, one of Balwinder’s friends enters the room to look for his purse but before he can see Balwinder, someone calls him and he comes out of the room.

In the wedding hall, Lakshmi is about to leave the hall when she feels as if Rishi is in the room.

When she turns around, she notices Rishi’s ring.

While Neelam and Malishka are happy that Lakshmi is getting married today, Lakshmi worries about how she will stop the wedding as it is Rishi.

Just then, Rano puts Rishi’s hand in Kamli’s hand which makes Rishi realize that it is not Lakshmi.

On the other hand, when Ayush mentions that Rishi is in the mandap instead of Balwinder, they start panicking as Rishi will end up marrying Kamli today.

While Lakshmi, Shalu, Ayush, and Bani are panicking, Rishi reveals that his plan was to create chaos in the wedding to stop Lakshmi's wedding.

Rishi then starts scratching his clothes as if he is feeling itchiness since he has realized that it is not Lakshmi who is sitting beside him in the mandap.