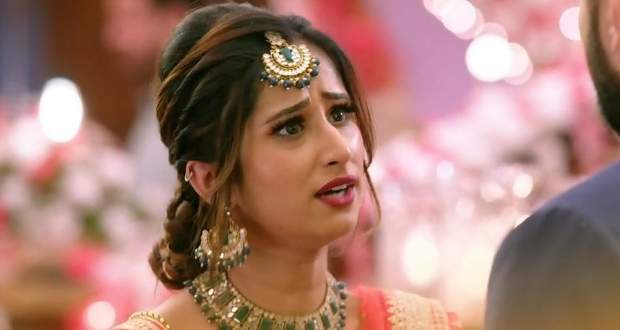 Today's Bhagya Lakshmi 28th May 2022 episode starts with Ayush telling Virenndra that he thinks he knows the disguised waiter.

Virendra dismisses Ayush’s words and walks away from there.

Meanwhile, Balwinder and Bobby put oil on the stair for Lakshmi’s fall.

On the other hand, Lakshmi gets encouraged by Shalu’s words and starts running toward Rishi to confess her love.

In the ring ceremony, Malishka puts an engagement ring on Rishi’s finger hastily as she thinks Rishi will change his mind.

Meanwhile running Lakshmi stops abruptly stops at the balcony after seeing Malishka’s hand on Rishi’s hand. Rishi also notices her and starts looking at her.

Everyone in the ceremony also stares at Lakshmi and Ayush urges Rishi to put the ring on Malishka’s finger.

Though Rishi agrees, he gets hesitant.

Rishi then asks Virendra to stop the engagement as he thinks Lakshmi has something to say.

Hearing this, Shalu urges Lakshmi to confess her feelings and Lakshmi starts mumbling.

Neelam asks Lakshmi to come downstairs if she wants to say something and Lakshmi agrees.

While Ayush accuses Lakshmi of creating problems for the Oberoi family, Balwinder hits Bobby in Lakshmi’s room and another waiter notices them.

Seeing Neelam hurt, Rishi and other family members take her to the hospital.

At the same time, Balwinder asks the waiter to keep his mouth shut but the waiter refuses to listen.

A guard arrives there and puts a gun on Balwinder’s head and the waiter goes to tell Virednra about it.

Meanwhile, in the hospital, Rishi starts expressing his worries for his mother and Malishka starts blaming Lakshmi for Neelam’s accident.

Shalu however snaps at her and tells everyone that Lakshmi is not at fault for Neelam’s accident.

Later in the Oberoi mansion, Balwinder tries to convince everyone that Bobby is not dead and he then makes Bobby smell his shocks and Bobby wakes up.

In the end, Ayush also starts blaming Lakshmi for Neelam’s accident and Karishma also joins him.

© Copyright tellybest.com, 2020, 2021. All Rights Reserved. Unauthorized use and/or duplication of any material from tellybest.com without written permission is strictly prohibited.
Cached Saved on: Sunday 2nd of October 2022 02:48:51 AMCached Disp on: Wednesday 5th of October 2022 06:18:23 PM