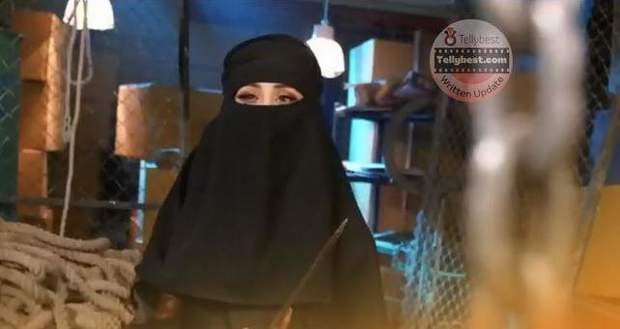 Today's Bhagya Lakshmi 28th November 2022 episode starts with Lakshmi trying to get up but she screams in pain.

Hearing Lakshmi’s scream, Rishi gets distracted and Malishka runs away from there using this opportunity.

On the one hand, Rishi finds Lakshmi injured who orders him to find the Burkha lady and Rishi informs her about Balwinder being there; on the other hand, Malishka discovers Balwinder lying near the entrance.

She questions Balwinder about the things she has ordered as soon as he comes back to his senses.

After Balwinder points towards the car, Malishka quickly sprinkles blood all over her body and even puts rope marks on her wrist.

She then starts the car and moves away.

Meanwhile, Rishi fails to find the Burkha lady and when he and Lakshmi come out of the godown, they don’t find Balwinder there.

Lakshmi then tells Rishi sadly that they still have no proof of her innocence but Rishi consoles her by saying that he will do anything to save her.

On the other hand, in the police station, while the police are discussing Malishka’s kidnapping case, she walks in looking like as if someone has beaten her very badly.

She then urges the police officer to take her statement despite the police’s request to go to the hospital.

In the meantime, Balwinder is walking on the road while he is thinking that once Malishka goes to the police station, Lakshmi will go to jail for a long time.

Meanwhile, in the Oberoi mansion, Karishma and Soniya are busy celebrating Lakshmi’s last day in the mansion with glasses of wine.

On the other hand, while Ayush is telling Harleen that police can arrive at any time now to take Lakshmi away, Virendra enters the room at the same time and orders him to call Lakshmi.

When Lakshmi picks up the call, Virendra announces that the truth cannot be hidden for long, and Lakshmi nods.

Lakshmi then tells Rishi that she is sure the lady was Malishka but Rishi denies it as he is sure Malishka can never do this.

Rishi further adds that if he accepts Malishka is behind this still it does not explain who kidnapped Malishka and Lakshmi looks lost.

In the meantime, in the police station, when Malishka is telling the police officer that she has run away from a burka lady, Kiran arrives there while yelling that Lakshmi is behind it.

Kiran then hugs Malishka tight with fake tears in her eyes while the police observe them silently.

A flashback then shows how Malishka called Kiran while driving and ordered her to come to the police station for her rescue.

© Copyright tellybest.com, 2022, 2023. All Rights Reserved. Unauthorized use and/or duplication of any material from tellybest.com without written permission is strictly prohibited.
Cached Saved on: Wednesday 25th of January 2023 05:44:46 PMCached Disp on: Thursday 2nd of February 2023 07:39:50 PM