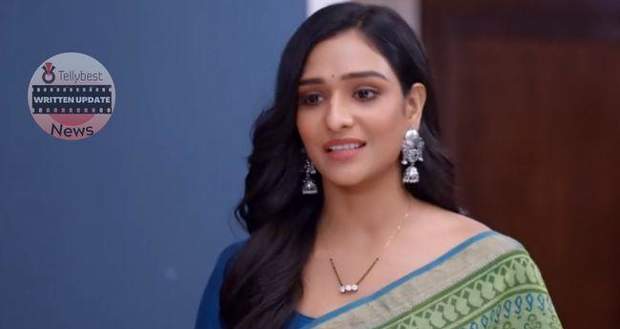 Today's Bhagya Lakshmi 28th September 2022 episode starts with Shalu and Lakshmi discussing Balwinder’s warning when he told Lakshmi that someone from the Oberoi family is plotting against her.

Meanwhile, Malishka cries and stares at her and Rishi’s photograph together, saying why Rishi had to go to jail instead of that illiterate Lakshmi.

Sobbing, Malishka states that she can go to any extent to get Rishi as she loves him very much.

On the other hand, Lakshmi realizes that someone is plotting against her as Balwinder took all the names in the Oberoi family.

She tells Shalu that they should inquire the chef to get any clues to get Rishi out of the jail.

At night, Malishka gets a nightmare in which she sees Lakshmi stealing Rishi away from her.

Malishka runs in her house screaming and wakes Kiran up.

Kiran assures Malishka that Rishi is still hers, however, Malishka is fearful of Rishi becoming Lakshmi’s slave if she gets him out of the jail.

In the morning, Lakshmi prays to God to support her to get Rishi out of jail while Karishma blames Lakshmi for ruining the atmosphere of Oberoi Mansion.

Karishma tells Lakshmi that she won’t be able to get Rishi released while Ayush asks Karishma if she will do what Lakshmi says if his Lakshmi Bhabhi gets Rishi out of jail.

Lakshmi scolds Ayush for talking rudely with Karishma while Ayush’s eyes are on Shalu only as he stares at her working in the kitchen.

He stares at her fondly while fixing her dupatta and Shalu blushes.

Shalu picks up her rolling pin when Ayush tastes the breakfast before she does.

Just then, Lakshmi arrives in the kitchen while Ayush teases Shalu saying she will make the food for Ayush and his wife once he gets married.

Shalu picks up her rolling pin again while Ayush pretends to be out of breath from running away from her.

While Lakshmi hand feeds Dadi breakfast, Dadi tells Lakshmi to say ‘I love you' to Rishi.

Lakshmi blushes while Dadi says she is a modern Dadi and knows Lakshmi will get Rishi released soon.

On the other hand, Sonia speaks rudely to Shalu while Ayush guards her.

Later, Lakshmi visits Rishi in jail and he hugs her as soon as he sees her.

© Copyright tellybest.com, 2022, 2023. All Rights Reserved. Unauthorized use and/or duplication of any material from tellybest.com without written permission is strictly prohibited.
Cached Saved on: Monday 21st of November 2022 05:30:43 PMCached Disp on: Tuesday 29th of November 2022 12:59:33 AM