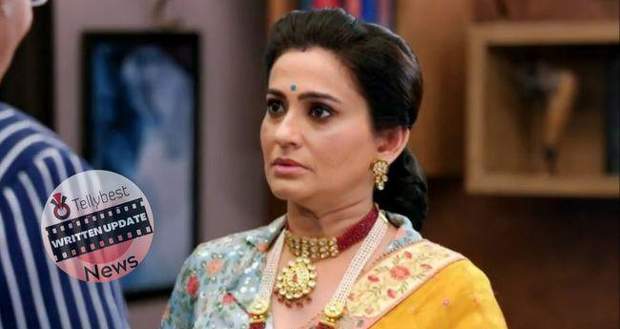 Today's Bhagya Lakshmi 29th August 2022 episode starts with Rano threatening Balwinder with jail while Balwinder informs her in confidence that she must be high on something.

Hearing this, Rano tells him with a smug smile that she overheard his conversation with his friend.

As expected, Balwinder gets scared and urges Rano to keep quiet.

He even offers money to Rano.

At first, Rano pretends to refuse but after a lot of urging from Balwinder, she agrees.

After the call cuts, Rano squeals in excitement as she has earned money while sitting at home.

On the other hand in the Oberoi mansion, Rishi questions everyone about why they have not stopped Lakshmi from going to jail.

Instead of feeling guilty, Neelam warns Rishi in a serious tone that Lakshmi has put many people's lives in danger.

Hearing this, Rishi announces with confidence that he knows Lakshmi cannot do this which makes Neelam shocked as she cannot believe her son can go against her like this.

She tries to stop Rishi but Rishi just tells her in a calm voice that he is going to bring his Lakshmi back.

While Rishi walks away, Neelam just watches him from a distance with sadness.

Seeing the adamant face of Rishi, Malishka burns with jealousy.

Meanwhile, in jail, Lakshmi is eagerly waiting for Rishi to show up.

At the same time, the jail warden informs another female criminal that her husband has come to meet her which disappoints Lakshmi she was hoping to hear her name.

After the lady leaves, other female criminals inform Lakshmi that her husband will never come since she has put a red mark on his restaurant.

Though Lakshmi defends Rishi by claiming he trusts her, she is no longer sure.

In the meantime in Oberoi's mansion, Neelam announces in a shaky voice that she cannot believe Rishi has gone against her for Lakshmi.

However, one by one Ayush, Harleen and Virendra start taking Lakshmi’s side, and Harleen orders Neelam to accept Lakshmi as her daughter-in-law.

Elsewhere in the police station, Rishi urges the police officer to let him meet Lakshmi.

At first, the police officer refuses to let him but after the warden’s begging, he lets Rishi meet Lakshmi.

While Lakshmi is eagerly waiting to hear Rishi’s name, the warden informs her of Rishi’s coming.

In the meantime, Malishka is shouting in her room in frustration as she failed again.