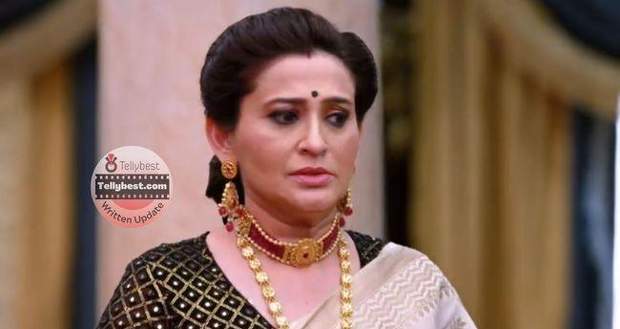 Looking at Lakshmi, Balwinder questions Lakshmi why she is pushing him away as she is divorced now.

This makes Lakshmi very angry and she slaps Balwinder hard on the cheek who starts smiling creepily because Lakshmi has touched him for the first time.

While Balwinder continues saying how he will take Lakshmi out for Panipuri, Lakshmi returns with a broomstick and starts beating him with it.

Scared Balwinder runs away from there and Lakshmi breaks down in tears.

Meanwhile, in a cafe, Malishka urges Rishi to wait for some time till the businessmen arrive for the meeting but irritated Rishi announces that people should value each other’s time.

Rishi even informs Malishka that he is going home but Malishka urges Rishi to spend some time with her.

Malishka then again rubs the night incident on his face by saying that if it was someone else then she would have accused that person of rape.

Malishka further tells Rishi that she knows Rishi still loves her as his touches feel very good to her.

This frustrates Rishi and walks away despite Malishka telling him that clients are on their way and Rishi should be professional.

After Rishi leaves, Malishka thinks to herself that she faked the arrival of clients just to spend some time with Rishi and to remind Rishi about that night incident.

She even tells herself that she has done this to portray herself as a victim in Rishi’s eyes.

On the other hand, while Lakshmi is crying, she hears a knock on the door and orders Balwinder to run away.

When Rano calls Lakshmi’s name, Lakshmi opens the door and Rano taunts Lakshmi by saying that Lakshmi wants to take everything from her.

Lakshmi then tells Rano about Balwinder’s coming and Rano praises Lakshmi for beating Balwinder with a broomstick.

In the meantime, in the Oberoi mansion, Karishma happily tells Neelam about Rishi approaching Malishka and Neelam announces that she will marry Rishi to Malishka very soon.

Neelam further announces that she will not let Lakshmi win now again.

Later, on the streets, Lakshmi orders the vendor to give her the groceries and while she is busy, the aunties start to mock her by saying Rishi must be having an extramarital affair.

Balwinder who is watching from the distance thinks now Lakshmi will feel upset and will get revenge for beating him.

On one hand, during driving, Malishka notices Lakshmi near the road and starts driving faster; on the other hand, Balwinder orders the neighbor aunties to stay away from Lakshmi.

Balwinder further tells Lakshmi is very pure while the aunties taunt Lakshmi for choosing a street-type man like Balwinder.

However, Lakshmi pushes Balwinder away and Balwinder runs away after noticing Lakshmi.

Rishi then starts running towards Lakshmi and Malishka follows him.

When Lakshmi looks up, she finds Rishi in front of her who drags Lakshmi toward the car.

Rishi then urges Lakshmi to get into the car to come home with him since Balwinder is a danger to her.

Lakshmi orders Rishi to stay away from her who in return tells Lakshmi that she can stay in a guest room but Lakshmi walks away.

After Lakshmi leaves, Malishka scolds Rishi for running after Lakshmi but Rishi announces that Lakshmi is not at fault.

Later in Oberoi's mansion, Sonal orders Maiishka to make Rishi feel guilty for that night and Malishka announces that she will make sure Rishi reveals this truth to everyone.

On the other hand, Neelam goes to talk to Kiran about getting Malishka and Rishi married and Kiran smiles.

© Copyright tellybest.com, 2022, 2023. All Rights Reserved. Unauthorized use and/or duplication of any material from tellybest.com without written permission is strictly prohibited.
Cached Saved on: Wednesday 25th of January 2023 02:35:02 PMCached Disp on: Sunday 5th of February 2023 02:32:20 AM