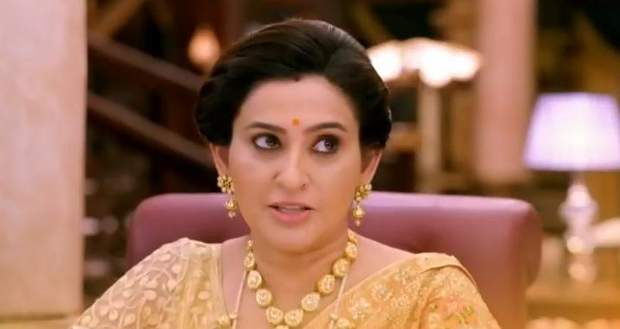 Today's Bhagya Lakshmi 29th July 2022 episode starts with Durga ordering everyone to stay silent during her interrogation of Ayush.

She even urges everyone to go back to their rooms.

While everyone is walking away, Durga asks Malishka why she is still here.

Feeling intimidated by Durga’s words, Malishka is shivering with fear.

To divert attention from Malishka, Kiran quickly informs Durga that they are also returning to their room.

At the same time, Harleen asks Durga if she can eat breakfast during her interrogation and Durga agrees.

She even invites Durga to have breakfast with them but she denies it as she is on duty right now.

Ayush then invites Durga to his room for the integration.

Elsewhere in Bajwa's house, while Bani and Shalu are discussing Neha’s intention of making Neha Ayush's wife, Neha and Rano enter the home.

Neha starts blaming Rano for ruining her chance with Ayush.

Rano tries to calm her down by announcing that Karishma is the one who started degrading her.

Instead of listening, Neha walks away angrily.

Meanwhile, in the Oberoi mansion, Lakshmi serves everyone their favorite food for breakfast.

Seeing the favorite food, Hraleen along with Virendra starts complementing Lakshmi for it.

While Lakshmi goes to serve Malishka, Malishka starts screaming at her for slipping food on her foot.

Seeing this as the perfect opportunity, Neelam and Karishma also start bashing Lakshmi for it.

Karishma even compares Lakshmi with servants.

However, Virendra orders everyone to calm down and eat their breakfast.

Angry Malishka walks away while Harleen urges Lakshmi to eat her breakfast as well.

Even Kiran gets up as she does not want to sit with her rival.

Rishi tries to change Kiran’s perspective but Neelam and Karishma order him to close his mouth.

Lakshmi then urges Kiran to carry on with her breakfast by promising that she will not sit with them.

On the other hand, Ayush tells Durga everything about Balwinder while Malishka eavesdrops on them from outside.

While leaving, Durga notices Malishka walking in the hallway.

Meanwhile, in the kitchen, Rishi asks Lakshmi why she did not take a stand outside.

Rishi then shares his plate with Lakshmi and urges her to eat.

When Lakshmi denies it, Rishi orders Lakshmi to taste the paratha as it does not contain salt.

He feeds Lakshmi with his hands with care.