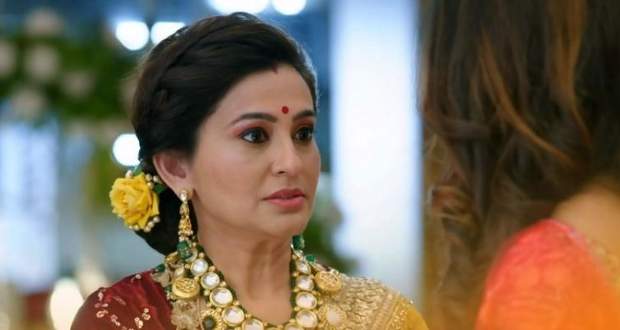 At the same time, Gautam’s parents announce that they are very happy as they are getting a very simple daughter-in-law.

Later, after completing all the rituals, Mrs. Guzral enthusiastically reveals that she cannot wait for Ahana to be her daughter-in-law.

Hearing this, Neelam tells her that it happens to everyone when something good is about to happen.

Mrs. Guzral then urges everyone to start the engagement process but Dadi stops her as she is yet to give her solo dance performance.

While Harleen lifts everyone’s mood with her energetic performance, Ahana and Gautam steal glances at each other awkwardly.

Elsewhere, the judge scolds Rishi and Lakshmi for being late but Rishi says that Lakshmi just wants his attention and that’s why she got sick in the morning.

Hearing this, Lakshmi tries to explain to the judge but Rishi interrupts her and as excepted they get into an argument.

The judge stops them by announcing that she will give her verdict later.

Hearing this, Lakshmi gets happy because now she has time.

Meanwhile, in the Oberoi house, everyone including Neelam praises Harleen for her energetic dance performance.

Harleen however announces that now Ahana and Gautam will dance together.

At first Ahana and Gautam, both deny but after Neelam and Karishma’s persuasion, they agree to do so.

During the dance, Ahana taunts Gautam for not being brave.

On the other hand, while searching for a suitable place for lunch, Rishi and Lakshmi once again get into an argument.

However, Rishi quickly dismisses the argument and asks Lakshmi to join him for lunch.

Lakshmi urges him to go fast as she needs to call someone.

Rishi agrees but he looks concerned for Lakshmi.

Lakshmi tries to call Ahana several times but she does not pick up her call.

Further in the Oberoi mansion, Harleen gives her blessing to Ahana and Gautam and then they take a group selfie.

While Neelam explains that Rishi will be back in a few minutes, Guatam and Ahana discuss her pregnancy.

Frustrated Ahana throws her phone away and seeing this Mrs. Guzral asks her if she is okay but Neelam interrupts and dismisses it quickly.

Later everyone advises Ahana to forget Lakshmi but Mrs. Guzral urges her to call Lakshmi if she wants.

© Copyright tellybest.com, 2022, 2023. All Rights Reserved. Unauthorized use and/or duplication of any material from tellybest.com without written permission is strictly prohibited.
Cached Saved on: Monday 21st of November 2022 04:30:22 AMCached Disp on: Thursday 8th of December 2022 02:41:32 AM