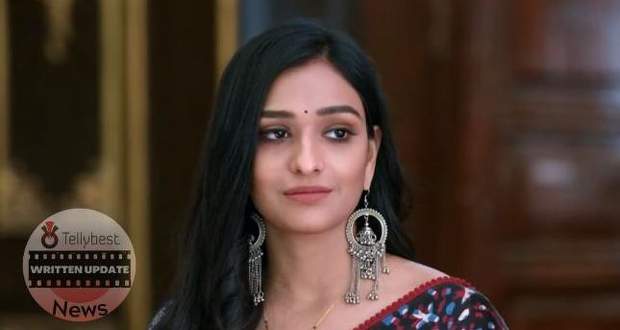 Angry Malishka pushes him away and Rishi collides with a car.

The car driver scolds Rishi for arguing with his girlfriend and orders him to walk away.

Malishka feels relieved seeing Rishi not getting hurt much and gets into a taxi.

Kiran calms sobbing Malishka down and orders her to break Lakshmi’s fast before the moon arises.

Weeping her tears, Malishka questions Kiran if it will affect Rishi’s health and Kiran reminds her that Rishi will get a blessing as Malishka will keep fast for him.

Malishka nods and announces that she will prove to the Oberoi family that she is a better partner for Rishi.

Meanwhile, in the Oberoi mansion, Lakshmi assures herself that Rishi will not do anything.

On the other hand, while Balwinder is walking toward his room with a water bottle, Rishi enters Malishka’s house.

Balwinder quickly hides behind a pillar and Rishi questions Kiran about whether Malishka arriving home or not.

Hearing Rishi’s words, Kiran thinks to herself that Malishka is such a stupid girl.

Rishi waits for Kiran’s response but when she does not reply, Rishi starts walking toward Malishka’s room.

Before Rishi can see Balwinder, Malishka arrives in the hallway and Rishi starts scolding her for being reckless.

Malishka gets happy seeing Rishi concerned for her and hugs him.

She then apologizes to Rishi and questions her if he loves her.

Rishi stares at Malishka and Balwinder drops the vase by mistake.

Malishka tries to distract Rishi by continuously urging him to propose to her but Rishi starts walking toward the hall.

Kirtan starts yelling at Malishka just then for risking her life and requests Rishi to leave as she has to teach Malishka a lesson.

After Rishi walks away, Kiran along with Malishka scolds Balwinder for getting out of his room.

Balwinder however starts screaming that Malishka neither has sweet water nor Bhojpuri songs in her home so he is getting bored.

He further reminds Malishka that if he gets into jail then Malishka will also go to jail.

Afterward, Kiran reminds Malishka that she loves her very much so Malishka should take care of herself, and Malishka nods.

Meanwhile, in Oberoi's mansion, Rishi urges Lakshmi not to keep Kravachaut fast as she saves his life daily.

Lakshmi tells Rishi that it is her duty.

On the other hand, while Shalu is telling Bani that she wants Rishi and Lakshmi to never get a divorce, she gets a call from Ayush who questions her if she fasting.

Shalu once again reminds Ayush that she is not married yet and Ayush urges her to keep fast for her future husband.

He even informs Shalu that he will also keep fast for his future wife.

© Copyright tellybest.com, 2022, 2023. All Rights Reserved. Unauthorized use and/or duplication of any material from tellybest.com without written permission is strictly prohibited.
Cached Saved on: Monday 21st of November 2022 07:52:33 AMCached Disp on: Thursday 1st of December 2022 01:11:56 PM