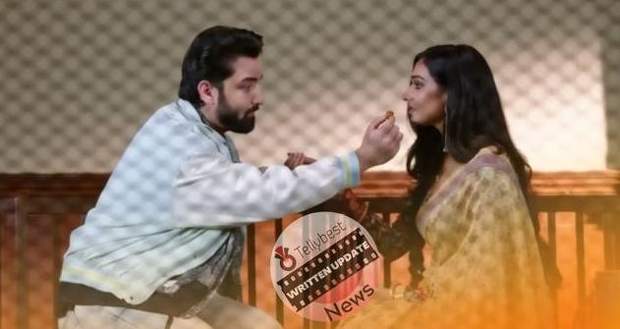 Today's Bhagya Lakshmi 29th September 2022 episode starts with Rishi and Lakshmi embracing each other in a tight hug.

After the hug, Rishi urges Lakshmi to behave like a typical Indian wife but Lakshmi tells him that Rishi is here because of her.

Hearing this, Rishi urges Lakshmi not to blame herself for this while Lakshmi starts feeding Rishi lovingly with her hands.

Rishi then also feeds Lakshmi and says that he knows she is also starving.

When Rishi requests Lakshmi to get him out of the jail quickly, Lakshmi questions him about Mukesh.

Further, Lakshmi informs Rishi that she is going to interrogate Mukesh first making Rishi smile and nod in agreement.

In the meantime, a lady constable arrives there and orders Lakshmi to leave as her time is up.

However, before Lakshmi leaves, Rishi advises her to take care of herself in a caring voice.

On the other hand, Ayush informs Virendra that almost all the companies are canceling their orders while Virendra also adds that their hotel license may get canceled.

Meanwhile, Malishka visits Rishi in the jail and starts bashing Lakshmi for ruining his image.

She even calls Lakshmi very fake with tears in her eyes while Rishi gets angry with Malishka.

Malishka accuses Rishi of not loving her anymore and starts banging her head on the wall like a mad person but Rishi calms down Malishka by yelling at her.

Afterward, Rishi informs Malishka that Lakshmi will get him out by integrating Mukesh.

After Rishi walks away, a scared Malishka decides to save herself first.

On the other hand, while Balwinder is showing his hand to the pandit to know his future with Lakshmi, he sees Malishka’s car out of nowhere.

Meanwhile, a goon arrives in the jail and accuses Rishi of ruining his brother's life.

Rishi and the goon get into a big fight.

Elsewhere on the streets, Balwinder runs to help Malishka when he notices Malishka's car hitting a stranger's car and the stranger gets into an argument with her.

© Copyright tellybest.com, 2022, 2023. All Rights Reserved. Unauthorized use and/or duplication of any material from tellybest.com without written permission is strictly prohibited.
Cached Saved on: Monday 21st of November 2022 02:19:28 PMCached Disp on: Wednesday 7th of December 2022 12:16:12 PM