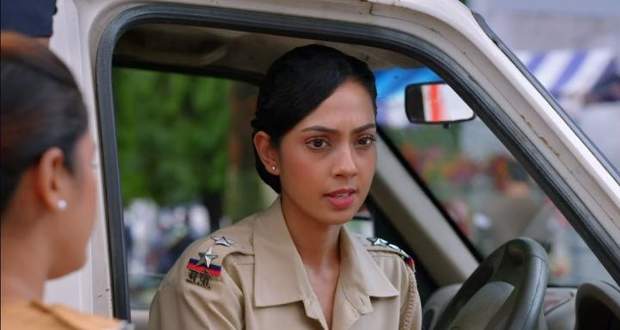 Balli gives a vague reply and walks away with his friend by grabbing his arm like a wife.

After they leave, Durga’s female colleagues announce that Balli walks like a model.

Hearing this, Durga’s male colleague teases his co-female partner by saying that she should also learn how to act like a female.

However, Durga stops them from bickering by ordering them to focus on their tea.

In the Oberoi mansion, like a stubborn kid, Harleen refuses to take her medicine as it tests bad.

However, Lakshmi informs her that if she doesn’t take her meds then she will behave like mom.

This blackmail works as Dadi takes her meds quickly.

Afterward, Lakshmi and Dadi get into a fun fight as Harleen doesn't want Lakshmi to see the photo.

While they are fighting, Virendra enters Harleen’s room.

Seeing them both fighting, Virendra asks them for the reason and Lakshmi spills Harleen’s love confession by mistake.

Lakshmi requests Virendra if she can arrange a puja in Harleen’s husband’s remembrance.

Virendra who considers Lakshmi as his daughter gets teary hearing this.

On one hand, Balwinder is cursing Malishka for getting him into the mess, and on the other hand, Malishka informs Soniya that she will take Rishi to the office to brainwash him.

Later while Rishi and Ayush are discussing work in the library, Malsihka enters the library abruptly.

She then starts urging Rishi to go office with her as the perfume launch is tomorrow.

However, Ayush who dislikes Malishka orders her to stay away from Rishi.

Before Ayush can say anything, he gets a call from Shalu and walks away.

After Ayush leaves, Malishka and Rishi get into an argument with each other because Lakshmi is his wife and she should accept it.

Elsewhere, Ayush confesses his liking to Shalu but quickly changes the topic.

He then gives the phone to Lakshmi and walks away.

When Shalu mentions that she wants to work as an interior designer, Harleen advises her to come to their house tomorrow so she can observe the decoration.

On the other hand, Malishka pins Rishi to a nearby wall and starts reminding their sweet time together like a mad person.

Instead of recalling Malishka, Rishi recalls his and Lakshmi’s memories.

Looking at Malishka with cold eyes, Rishi informs her that he doesn’t remember it.

© Copyright tellybest.com, 2022, 2023. All Rights Reserved. Unauthorized use and/or duplication of any material from tellybest.com without written permission is strictly prohibited.
Cached Saved on: Monday 21st of November 2022 05:31:28 PMCached Disp on: Thursday 1st of December 2022 10:16:58 PM