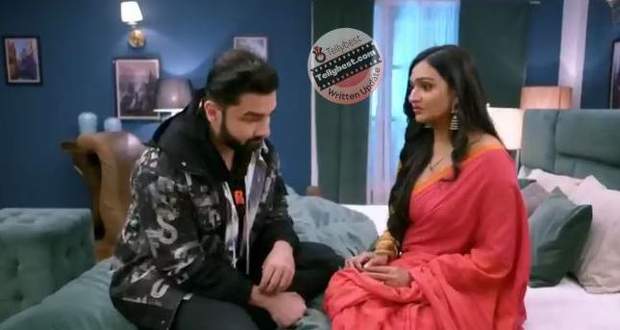 Guddu tells Balwinder that it is his luck that Rishi has not caught him otherwise he would have been hanged by now.

Balwinder, however, curses Lakshmi for always standing with Rishi since it is the only reason his plan failed of killing Lakshmi for the money.

Meanwhile, in Malishka’s home, Malishka fumes in anger seeing Rishi and Lakshmi romancing each other in the mirror.

She yells at Lakshmi not to kiss her Rishi and even urges Rishi not to do it but when both of them do not listen, Malishka breaks the mirror.

She then notices Lakshmi’s face on the broken piece of the mirror who mocks Malishka by announcing that her mangal sutra and sindur have beaten Malishka in this war.

Malishka even imagines Rishi taunting her by saying that she is the one who ordered him to marry Lakshmi so now she cannot act angry.

Feeling betrayed by Rishi, Malishka picks up the broken mirror piece and stabs herself.

On the other hand, in the Oberoi mansion, Lakshmi and Rishi fall onto the bed with Lakshmi on Rishi’s top.

While Rishi gets lost in Lakshmi’s eyes, Lakshmi quickly stands up and questions Rishi if he has eaten anything.

Rishi teases Lakshmi by announcing that he was just sitting at the table without eating and Lakshmi orders him not to pull her leg.

Hearing this, Rishi pulls Lakshmi by her hand while announcing that he can grab her hand then but Lakshmi reminds Rishi that it is late so they should go to sleep.

In the meantime, Kiran is walking in her home while thinking that Sonal will resolve Malishka’s issues.

Meanwhile, in Malishka’s room, Malishka hallucinates Rishi who rushes to save her and he even tells her that he will not let anything happen to her.

Rishi then gets a call from someone who informs him about Lakshmi hurting herself and he walks away leaving Malishka to die.

Malishka then comes out of her nightmare and announces Rishi has lost her.

She is about to stab herself in the stomach when Kiran arrives at the entrance.

Elsewhere in the Oberoi mansion, Rishi makes fun of Lakshmi by lying that there is a cockroach on the floor.

When Lakshmi realizes Rishi is kidding, she orders him not to do it and Rishi then teases her by saying that other girls will love Rishi following them always.

Afterward, Lakshmi orders Rishi to follow her around till she is in his life like a jealous wife and Rishi smiles.

In the meantime, Kiran slaps Malishka for thinking like this and she even calls Sonal who orders Malishka to stay alive till she comes there.

After cutting the call, Malishka hugs Kiran while muttering she cannot live without Rishi.

On the other hand, Tushar Kapoor aka Rajeev Dixit notices a black hooded person running into the Oberoi mansion and he follows him.

Tushar then tells the Oberoi family that Nina and Puja’s murderer is hiding in the Oberoi mansion and handcuffs Rishi who has worn this black dress thinking Lakshmi has given her.

After getting the call, Tushar lets Rishi go since he's not the murderer.

Tushar has arrived at the Oberoi mansion to promote his upcoming movie Maarich.