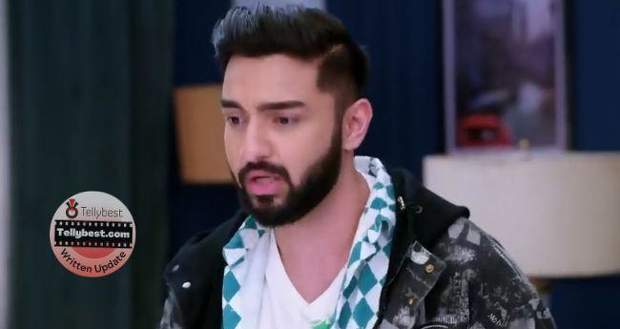 Today's Bhagya Lakshmi 2nd January 2023 episode starts with Malishka getting a call from Soniya who informs her about Rishi meeting Lakshmi in a restaurant.

Once Soniya cuts the call, Malishka looks at Sonal who grins at her and Malishka announces that earlier Lakshmi only saw her in Rishi’s arms but now she will hear Rishi’s confession too.

This makes Sonal happy as Malishka has started thinking just like her and Malishka announces that she has only some time to plan everything.

Meanwhile, in Oberoi's mansion, taking out money from the locker, Neelam tells herself that she will make Rishi marry Malishka very soon so Lakshmi stays out of Rishi’s life.

On the other hand, in the restaurant, Rishi finds some people surrounding someone and when he goes close to check, he finds Malishka sitting on the floor wincing in pain.

While Rishi looks at her with a worried expression, Malishka informs him that she is in very much pain so she needs to sit.

As soon as Rishi and Malishka take their seat, Malishka asks Rishi what he will tell his family about them.

At the same time, Lakshmi enters the restaurant and gets surprised to see Rishi and Malishka there.

Lakshmi overhears Rishi confessing to Malishka that he still loves her but he was forced to marry Lakshmi.

Rishi further tells Malishka that he started understanding her after the marriage and he felt pity for her since she is poor so he refused to divorce her as Lakshmi will get the tag of a divorced woman and her aunt would have scolded her.

Rishi even reveals that whatever happened between him and Malishka was not a mistake but Lakshmi has done so much for him which shocks Lakshmi.

In the meantime, Ayush and Shalu are busy discussing the chances of Rishi and Lakshmi clearing their misunderstanding.

Meanwhile, in the restaurant, Lakshmi is walking towards Rishi while Malishka is crying crocodile tears.

However, feeling hurt by Rishi’s words and realizing Rishi has spoken his mind, Lakshmi walks out of the restaurant.

On the other hand, Neelam’s car stops in front of the building and calls someone to tell them that she has the money ready.

While Lakshmi goes silent, Virendra tells Lakshmi that he wishes Lakshmi gets all the happiness and Lakshmi orders him to take his medicines on time.

Once Lakshmi cuts the call, she gets upset realizing that Ayush has lied to her.

Inside the restaurant, Malishka informs Rishi that she is feeling better now and Rishi thinks he will come back to the restaurant after dropping Malishka home to meet Lakshmi here.

When Malishka stands up to go, she flinches in pain and Rishi walks her out of the restaurant in his arms.

While Rishi is walking with Malishka in his arms, Lakshmi notices this and her heart shatters into pieces.

To make Lakshmi even more jealous, Malishka kisses Rishi on the cheek which confuses him.

Lakshmi's eyes go widen whereas Rishi informs Malishka that he is taking her home.

Later, when Lakshmi arrives home, she scolds Shalu for making a plan with Ayush and on the other hand, Rishi puts Malishka in her bed.

When Rishi texts Lakshmi, Lakshmi informs him that she is not coming which makes Rishi upset.

Meanwhile, Malishka recalls how she and Sonal appointed a waiter who dropped juice on Rishi's shirt causing him to go to the washroom and how someone else used Rishi's voice to manipulate Lakshmi.