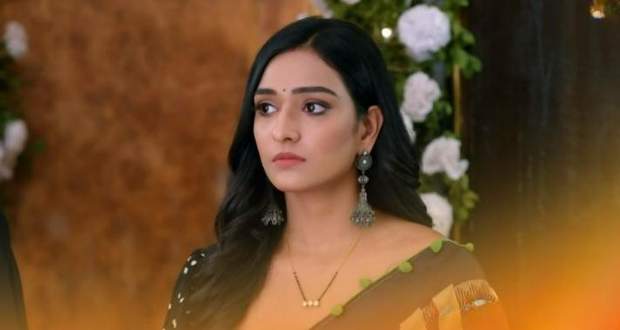 Later in the living room, while Rishi tries to say something to Lakshmi, Ayush interrupts him.

Ayush then advises Rishi to remember what misdeeds Lakshmi has done to them.

However, Rishi dismisses Ayush from there and asks Lakshmi if she is okay or not.

At the same time, Malishka also interrupts them and as usual, informs Lakshmi about her and Rishi’s strong bond.

She then takes Rishi to his room and asks him why he is siding with Lakshmi.

She even says that Lakshmi has defamed the Oberoi family by getting pregnant with a driver.

Hearing this, Rishi shouts at Malishka informing her that Lakshmi is not pregnant, and Ahana is.

Elsewhere, while Bani is massaging Rano's legs, Neha reminds her about Balwinder.

Meanwhile, in the Oberoi's mansion, Rishi informs Malishka that he will find the one who has told Balwinder about Lakshmi’s pregnancy.

After Rishi leaves, Malishka tells herself that she needs to stop Balwinder from coming into the Oberoi mansion otherwise her truth will come out.

Later in the living room, Mrs. Guzral apologizes to Lakshmi and even blesses her for prosperity.

At the same time, Dadi arrives there and starts asking Lakshmi for rassgulas.

As excepted, everyone reminds Harleen about her diabetes and advises her to eat only two pieces.

While taking the sweets, Harleen drops some sweet syrup on Gautam’s shirt.

Ahana uses this opportunity to take Gautam to her room and Karishma sweetly calls her possessive.

When Lakshmi is in the kitchen, the light goes out and Rishi enters the kitchen with the candle.

He then begs Lakshmi’s forgiveness for behaving like a jerk.

However, Lakshmi dismisses his sorry and says that it’s okay.

Rishi even says that he should have listened to his heart and stopped everyone from humiliation.

Meanwhile, in the room, Ahana again orders Gautam to tell the truth to his parents as she does not want to start her relationship with false words.

Mrs. Guzral eavesdrops on them, from outside the door.

When Ahana tells Gautam about her pregnancy, Mrs. Guzral bursts into the room.

On the other hand, Lakshmi gives advice to Rishi to forget everything and start fresh.

Hearing this, Rishi again praises Lakshmi for being so strong.

Lakshmi then cherishes Rishi’s hair and thanks him for standing up for her in front of Balwinder.

After Rishi walks away, Lakshmi hears some noise and when she goes to check Balwinder grabs her from behind.

© Copyright tellybest.com, 2020, 2021. All Rights Reserved. Unauthorized use and/or duplication of any material from tellybest.com without written permission is strictly prohibited.
Cached Saved on: Saturday 1st of October 2022 11:31:52 PM