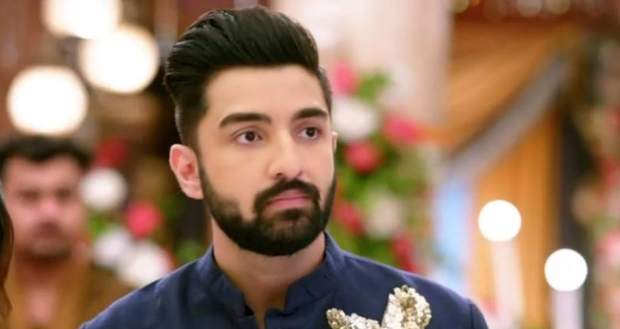 Meanwhile, Malishka arrives there with Rishi and tells Lakshmi smugly that Rishi is and always be hers.

Hearing this, Lakshmi just stays silent while Rishi and Malishka get ready for the engagement.

Ayush then scolds Panditji for not chanting mantras for the engagement.

Therefore, when Rishi is putting a ring on Malishka’s finger Shalu arrives there and asks Rishi to stop the engagement.

However, Malishka urges Rishi to put the ring on her finger and Rishi obeys.

While Shalu is pleading with Rishi with her eyes, another voice comes from the background and announces that she also wants to witness the engagement.

Later the judge enters the Oberoi mansion and asks everyone to explain what is happening there.

Malishka comes forward and tries to play over smart by telling the judge that she and Rishi are just doing a promise ceremony.

Hearing this story, the judge gets more pissed and urges Malishka to stop her fake story.

Rishi then comes to Malishka’s rescue and tells the judge that he is getting engaged with Malishka as he will get a divorce from Lakshmi soon.

Now the judge announces since Rishi is not obeying the court’s order he will go to jail but before she can call the police Lakshmi comes forward and stops her.

Lakshmi then claims that she is the one who has ordered Rishi to get engaged with Malishka in anger.

While Lakshmi takes the blame Shalu shouts at her for this but Lakshmi tells her to shut up.

Hearing this, the judge expresses her disappointment and gives Lakshmi one last warning.

She further calls out Neelam for being stupid and before walking away she asks Lakshmi to bring Rishi with her tomorrow in her office.

Lakshmi then goes to farewell the judge but before getting into the car the judge advises Lakshmi to fight for her love.

Seeing the engagement breaking, Shalu breathes a sigh of relief.

Meanwhile, everyone is blaming Lakshmi again for the judge’s arrival, and seeing this Shalu announces that she is the one who has called the judge.

In the end, Malishka overhears the judge and Lakshmi’s conversation.

© Copyright tellybest.com, 2020, 2021. All Rights Reserved. Unauthorized use and/or duplication of any material from tellybest.com without written permission is strictly prohibited.
Cached Saved on: Wednesday 1st of June 2022 11:36:41 PMCached Disp on: Thursday 30th of June 2022 04:16:30 PM