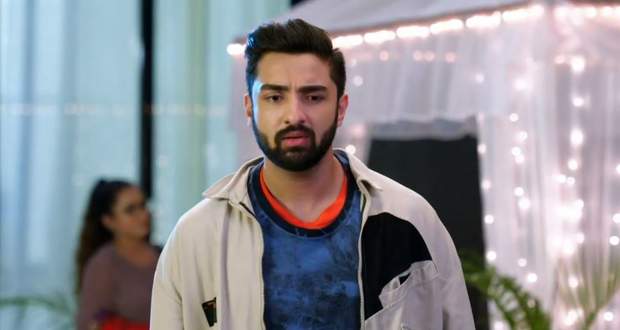 Today's Bhagya Lakshmi 2nd May 2022 episode starts with Lakshmi being stunned to see Rishi bring alcohol in front of her.

Further, Lakshmi exclaims that she knows he is drinking to make her go away from him but she won't.

Though Lakshmi does not want Rishi to drink, Rishi forces her to pass over the glass and bottle to him.

Meanwhile, Malishka uses the common balcony to spy upon Rishi and Lakshmi and notices Lakshmi giving the drink to Rishi.

Malishka becomes restless to see Rishi drink while he is alone in a room with Lakshmi.

So, she makes the worst move by using her dumbest mind and calling the police.

Pretending to be Lakshmi, Malishka complains that a man is trying to molest her and gives the address of Rishi and Lakshmi's room.

In the room, Rishi pulls Lakshmi closer and forcefully keeps her in his clutches.

Though Lakshmi asks Rishi to stay away as she feels unpleasant by the smell of alcohol coming from him, he keeps trying to annoy her.

In the meantime, the police arrive at the hotel while Malishka watches them from a distance.

When Rishi opens the door in a drunk state, the police inform him about Lakshmi's call for complaint and arrest him.

Lakshmi tries to explain that she did not make any call but Rishi asks her to stop acting.

Further, Rishi accuses Lakshmi of being a cheater because of which the police arrests both of them.

After arriving at the police station, the officer refuses to let Rishi go until he is sober.