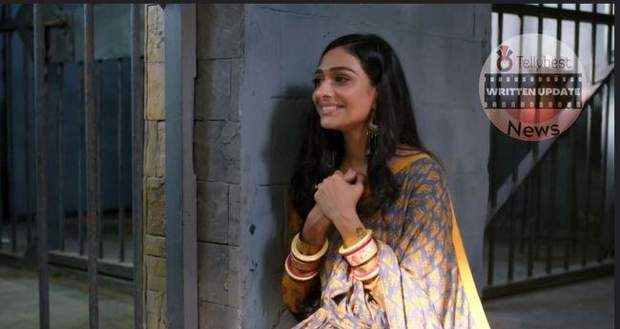 Today's Bhagya Lakshmi 2nd September 2022 episode starts with Lakshmi understanding the budding love between Aayush and Shalini and vows to help them advance their love story.

As she comes back from the visit she finds that her cellmates have hidden Rishi’s ring.

She panics and requests them to return it but they tell her that they are messing with her just for time to pass.

They further continue that if Rishi truly loves Lakshmi, she will find the real thief of his ring.

Meanwhile, Neelam asks Virendra about Mr. Basu and frustratingly says that she does not matter to him anymore.

She also makes him count the various time she sacrificed herself and did so much for the family and him.

On this, Virendra only patiently tells Neelam that she was right every time in the past whenever she took decisions for her family however, she is wrong this time and tells her the times Lakshmi saved Rishi’s life.

Neelam gets quiet after defeat and irritated and Virendra comes out when Dadi, who overheard their conversation, appreciates him for his patient replies and right choices.

During this in jail, suddenly Lakshmi daydreams about Rishi and asks him if he will never break his promise, and Rishi nods.

She asks him for help and to everyone’s surprise, finds the ring.

On asking how did she know, she divulges that Rishi told him who stays in her heart while everyone coos at their love.

On the other hand, Rishi begins missing Lakshmi and apologizes to her to keep her waiting in jail for another day.

He suddenly hears Lakshmi’s voice and turns around to find her waving at him.

He looks at her in awe and begins dancing with her flawlessly, holding hands in hands and eyes looking at her as if this is the dawning of new love in them.

Rishi caresses her hands and hugs her and tells her that he will never leave her and asks her answer if she wants to stay with him forever.

Lakshmi says yes and Rishi overwhelms with joy, however, the dream remains a dream when Rishi suddenly wakes up and begins talking to himself about how life looks meaningless without her.

Malishka eavesdrops on him and in jealousy goes to her room yelling like a psychopath about why Rishi is dreaming about Lakshmi.

Kiran barges in and consoles her that Lakshmi is in jail and will not return but Malishka requests her to not give fake hopes.

She says that now she will make the police investigate this case the way she will want.

And suddenly Malishka's father Abhay barges in convincing her that that will only happen and he will make sure of it.

© Copyright tellybest.com, 2020, 2021. All Rights Reserved. Unauthorized use and/or duplication of any material from tellybest.com without written permission is strictly prohibited.
Cached Saved on: Friday 30th of September 2022 06:40:43 PMCached Disp on: Saturday 1st of October 2022 12:14:09 AM