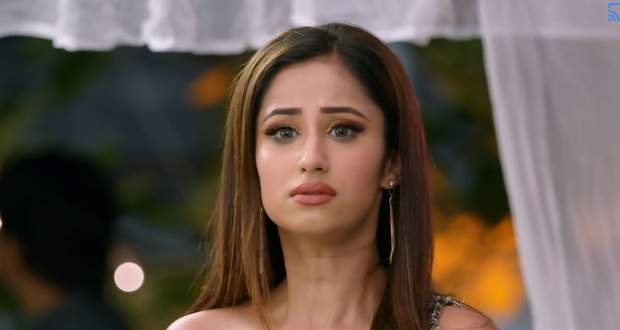 Today's Bhagya Lakshmi 30th April 2022 episode starts with Malishka determining to get back Rishi from Lakshmi.

On the other hand, Rishi tells Lakshmi that he is just keeping the countdown running for the three months to be over.

Lakshmi asks Rishi with tears in her eyes whether he'll be happy after she leaves.

Firstly, Rishi speaks what his heart really feels and says no but he covers it up by saying that he will be extremely happy with Malishka.

With a heart-wrenching feeling, Lakshmi says that this is perfect and walks out of the room.

Lakshmi bumps into Radha (from the Radha Mohan serial) who notices Lakshmi's tears.

On asking, Lakshmi says that she loves someone who wants to be with someone else.

Radha relates to her and mentions Mohan whose happiness is all she is seeking for.

Meanwhile, Rishi gets a call from his divorce lawyer who winds him up against Lakshmi.

The lawyer says that Lakshmi is collecting evidence against Rishi to get an immense amount of alimony along with the divorce.

Rishi finds Lakshmi's diary with some dates which he misunderstands to be evidence against him.

In the meantime, Ronit tries to harass Lakshmi.

After some time, Rishi arrives there and spots Lakshmi asking Ronit to stop following her.

Rishi holds Ronit's collar and asks him why can't he understand that Lakshmi isn't interested to have any kind of conversation with him.

On the other hand, the lawyer fills the minds of the Oberoi family with the same things he told Rishi.

Later, Malishka calls Rishi and tells him that she is scared to lose him to Lakshmi.

To make her feel good, Rishi says I Love You to her and states that Lakshmi is with him just for the sake of her intentions.

© Copyright tellybest.com, 2020, 2021. All Rights Reserved. Unauthorized use and/or duplication of any material from tellybest.com without written permission is strictly prohibited.
Cached Saved on: Sunday 2nd of October 2022 04:44:32 AM