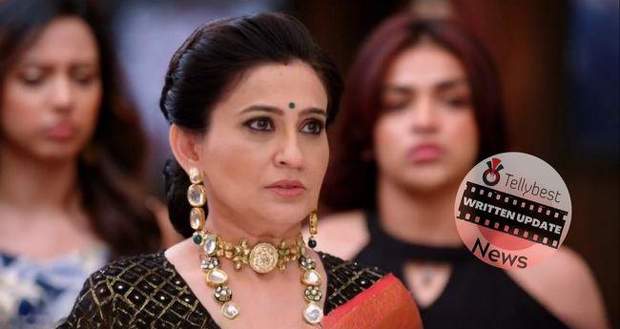 However, she stops on her track to admire Rishi with happy tears in her eyes who turns with a smile on his face.

They hug and Rishi apologizes for coming late while Lakshmi emotionally tells him that only him coming is enough for her.

Meanwhile, at the Oberoi house, Malishka vents to Kiran about how the whole family is talking about Rishi and Lakshmi being in love with each other.

However, Kiran tells her that they still have Neelam under their palms and they start forming a plan to do anything to snatch Rishi from Lakshmi.

Back in the jail, Rishi teases Lakshmi saying that he knew she was calling for him and tells her to fear not as he will surely get her out of there.

Lakshmi shies away and tells him that she is not fearful and that it is a lot quieter in the cell than at the Oberoi house.

Rishi holds Lakshmi by her shoulder and they get lost in each other's eyes when the inspector and the warden come there.

Rishi requests five more minutes but the inspector orders him to leave after which Rishi leaves with the promise to Lakshmi that he will get her out of there.

The next day, Bani keeps questioning Shalu if Rishi came and bailed Lakshmi as they both keep discussing.

Just then, Rano comes there and taunts them when Shalu suddenly gets a call from Aayush.

Shalu hears something about an accident and rushes out while she bumps into Neha on the way.

On the other hand, at the Oberoi mansion, Kiran goes to Neelam's room and closes the door after which she tries to instigate Neelam against Lakshmi.

Kiran uses her acting skills and manages to get a promise from Neelam that she will make Malishka the daughter-in-law of the Oberoi house and Rishi's wife.

Internally, Neelam vows to herself that she will get her son back from Lakshmi.

Rishi starts saying flirty statements to the warden and makes her uncomfortable.

The inspector tells Rishi to leave and he starts running around the police station stating that he won't leave unless he meets Lakshmi once more.

At the same time, Shalu looks for Aayush worried when she bumps into him and they get lost in each other's eyes.