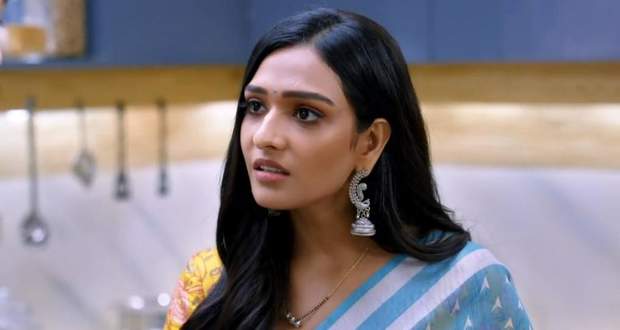 Today's Bhagya Lakshmi 30th July 2022 episode starts with Rishi and Lakshmi feeding each other while he teases her by joking that he will be her fingers.

Meanwhile, Malishka sees them being lovey-dovey and gets jealous.

Later, Inspector Durga arrives at the Oberoi house and requests Lakshmi for a talk while Malishka worries about herself being caught.

Further, Lakshmi and the police officers go to her room while Rishi insists on staying with Lakshmi to give her moral support.

Inspector Durga requests Lakshmi to reveal her story to Balwinder from the start.

However, Lakshmi reveals how her parents died on the day of her marriage and how she came to stay with her Chacha and Chachi in Delhi.

Lakshmi further gets more emotional but reveals how Chachi fixed her marriage with Balwinder and he tried to molest her which led to her refusal of the marriage.

Lakshmi restates all the times with Balwinder tried to kidnap her and get forcefully married to her.

Rishi holds Lakhmi's hands for support while Inspector Durga apologizes to her for making her revisit those memories.

Later, Inspector Durga is talking with the constables and learns that the news about the death of Balwinder's ex-wife is going around but no death has been reported to the police.

Another constable suggests that someone from inside the house is with Balwinder and Inspector Durga reveals her doubts about Malishka.

At the same time, Malishka recalls Rishi and Lakshmi getting closer and throwing a vase in anger.

Meanwhile, Dadi and Ahana walk past their room and decide to eavesdrop on their conversation.

Rishi tells Lakshmi that he will never leave her alone, at least not until she wants him to while he sees tears in Lakshmi's eyes and panics.

However, Lakhmi tells him that they are happy tears.

Meanwhile, outside, Aayush also joins Dadi and Ahana in eavesdropping on their conversation.

Aayush gets excited hoping that Rishi confesses his love for Lakshmi finally but accidentally barges inside their room falling on their knees.

Meanwhile, Malishka vents to her mother Kiran that she's scared she will get stuck in her plan and asks her what she should do.

Kiran tries to encourage her but sours Malishka's mood instead.

Elsewhere, Balwinder is angry at Malishka and manages to take a phone from the passerby to call her but she doesn't pick up the calls.

© Copyright tellybest.com, 2022, 2023. All Rights Reserved. Unauthorized use and/or duplication of any material from tellybest.com without written permission is strictly prohibited.
Cached Saved on: Wednesday 25th of January 2023 12:04:40 PMCached Disp on: Thursday 9th of February 2023 07:43:38 AM