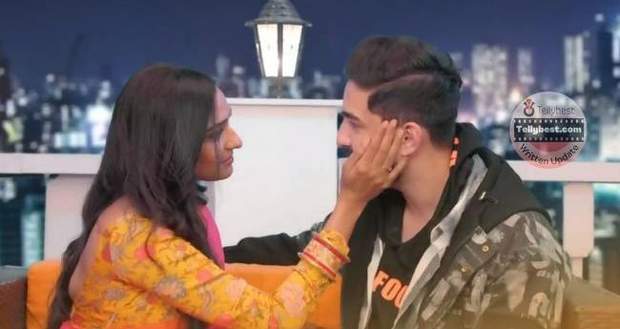 Rishi then questions Lakshmi about why she has not called the servants for the task to which Lakshmi replies that everyone was busy.

Lakshmi further asks Rishi what he is doing here and Rishi announces that he has come here to give Lakshmi this rose.

While Lakshmi is looking at him, Rishi informs her that he has given flowers, and books to other people so it’s no big deal for him.

Lakshmi then urges Rishi to put the rose on her hair with a shy smile and after doing it, Rishi pulls a strand of Lakshmi’s hair away romantically.

On the other hand, Malishka is waiting for Rishi when a thought strikes her that maybe Lakshmi is keeping Rishi busy.

She however dismisses this quickly as she thinks Rishi is only hers.

Meanwhile, in the Oberoi mansion, Rishi tells Lakshmi that every husband in the world should help their wife as it helps them to understand each other better.

When Rishi goes to bring the saree down, the saree drapes around him making Lakshmi laugh.

Lakshmi then goes to help Rishi and as soon as the saree is removed from Rishi’s face, he comes closer to Lakshmi to move her hair away lovingly making Lakshmi shiver.

Rishi and Lakshmi are lost in each other eyes when the clouds rumble loudly causing them to separate in surprise.

With a grin, Lakshmi announces that she is going downstairs but Rishi stops her by picking her up in his arms.

On the other hand, Malishka decides to visit Rishi in the Oberoi mansion to snatch him away from Lakshmi’s grip.

When she comes out of the room, she collides with Rishi while the book of roses falls around them.

Happy Malishka questions Rishi if Lakshmi was keeping him busy and Rishi just smiles at her.

However while walking, Malishka collides with a wardrobe and when she looks up Rishi is gone which means she was daydreaming.

Meanwhile, Rishi and Lakshmi are busy touching each other’s faces lovingly while the cloud continues to rumble.

Malishka arrives there at the same time and seeing Rishi close to Lakshmi, she angrily kicks a vase and walks away.

Hearing the noise, Rishi and Lakshmi start looking around and Neelam also enters the roof with a servant.

Rishi walks away quickly finding Neelam there and Lakshmi starts helping the servant while Neelam glares at her.

After Lakshmi runs away, Neelam looks at the sky aimlessly.

In the meantime, while Bani is teasing Shalu about Ayush, Shalu gets a call from Ayush who starts flirting with her.

After cutting the call, Ayush grins from ear to ear whereas Shalu blushes in front of Bani.

Malishka then starts yelling at Rishi who stays there silently but when Malishka questions him why he is changed, Rishi announces he is married now.

© Copyright tellybest.com, 2022, 2023. All Rights Reserved. Unauthorized use and/or duplication of any material from tellybest.com without written permission is strictly prohibited.
Cached Saved on: Wednesday 25th of January 2023 12:43:15 PMCached Disp on: Tuesday 7th of February 2023 01:49:15 AM