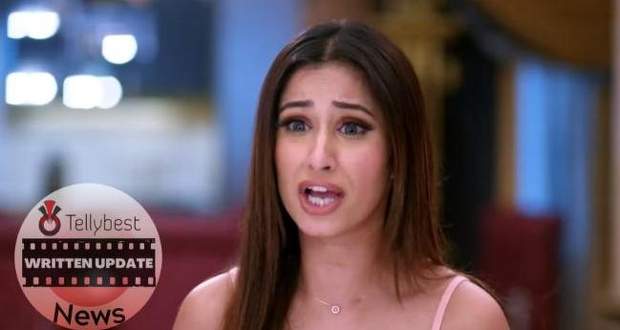 Meanwhile, Rishi tells Lakshmi to set an alarm as she needs to eat sargi otherwise she will be hungry the whole day.

Looking at Rishi, Lakshmi questions him about how he knows about all this and Rishi takes Harleen’s name.

On the other hand, angry Shalu cuts Ayush’s call after calling him “jhalla” again and Bani starts teasing Shalu about whether she will keep fast or not.

Meanwhile, Ayush thinks now he can sleep properly as he has listened to Shalu’s voice and a smile spreads across his face.

Lakshmi on the other hand tells Rishi that he does not need to set an alarm as it will disturb his sleep too.

She further questions Rishi why he cares so much for her and Rishi gulps.

He however tells Lakshmi that Lakshmi is fasting for him so he wants her to eat.

Afterward, Rishi goes to sleep on the couch while Lakshmi smiles lovingly.

Later, Rishi wakes up but gets stunned to see Lakshmi is sleeping still.

He then slowly seats beside sleeping Lakshmi on the bed and starts stroking her hair softly.

With a soft smile, he lies down beside her and Lakshmi grabs his hand.

While trying to remove Lakshmi’s hand, Rishi kisses Lakshmi on her cheek.

Lakshmi wakes up simultaneously and is surprised to see Rishi beside her.

Rishi then urges Lakshmi to get ready quickly for the sargie.

Rishi along with Lakshmi arrives there just then and Harleen happily gives sargi to Neelam.

With a weird smile, Neelam also gives sargi to Lakshmi.

The next morning, Rano brags to her friend that she is going to celebrate karvachaut in Lakshmi’s rich in-laws' house.

After Rano walks away, Shalu worriedly informs Bani that she hopes Rano does not cause any scene in Oberoi's mansion.

On the other hand, Kiran and Malsihka enter the Oberoi mansion, and Kiran asks Neelam if Lakshmi will be able to keep the fast or not.

Looking at Lakshmi, Neelam replies sternly that she thinks Lakshmi will.

Harleen approaches Neelam and Lakshmi at the same time and orders them both to rest.

Lakshmi denies it but Neelam orders her not to mess up the Karvachaut as it is for her son’s health.

Later while Lakshmi is walking toward the kitchen, she meets Rishi who orders her to rest.

Lakshmi denies and they get into a funny banter.

Malishka who is watching them from a distance burns in jealousy.

Meanwhile, Rishi informs Lakshmi that if she does not obey him, he will pick her up in his arms and carry her.

Lakshmi scoffs at first but when Rishi tries to pick her up, she objects.

© Copyright tellybest.com, 2022, 2023. All Rights Reserved. Unauthorized use and/or duplication of any material from tellybest.com without written permission is strictly prohibited.
Cached Saved on: Monday 21st of November 2022 05:48:58 AMCached Disp on: Friday 9th of December 2022 03:31:25 AM